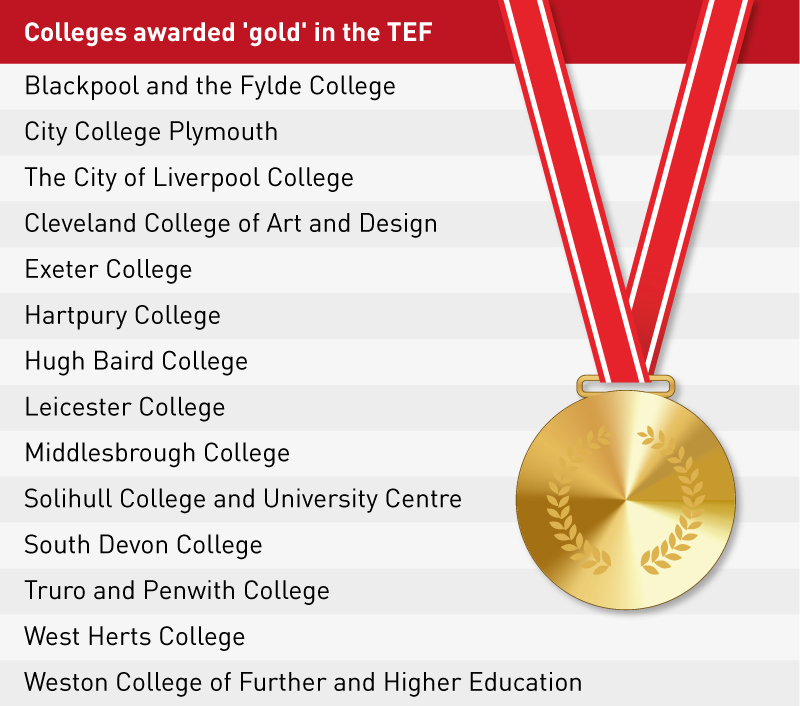 The feat was doubly impressive for the sector’s high achievers, as more than half of Russell Group universities – traditionally considered to be the best in the country – missed out on the best mark.

A total of 295 higher education providers are included in the TEF, which was conducted by the Higher Education Funding Council for England. Of the 106 colleges that took part, 14 were awarded gold (listed above), the best grade, while 46 achieved silver and 31 were rated bronze.

The other 15 received a “provisional” rating.

The TEF assesses higher education institutions on the quality of teaching and the outcomes they achieve, taking into account factors such as teaching quality, student satisfaction and graduate employability.

This is a trial year for the ratings, but they might in future affect the levels of fees universities are able to charge, and could be a measure on which students base their university choice.

David Hughes, the chief executive of the Association of Colleges, said he was “delighted” that the TEF “confirmed what we already knew – that colleges up and down the country are delivering high quality higher education which matches the best”.

He continued: “This is the first set of full results for the TEF and I am sure that colleges and HEFCE will have learned a lot from the experience.

“We will work closely with the TEF team to ensure that the metrics and the assessment work well for colleges which tend to have more part-time and older students who are working whilst learning.”

But other voices in the sector have opposed the new performance indicator.

Sorana Vieru, vice-president for higher education at the National Union of Students, said the publication of the TEF is “another meaningless university ranking system no one asked for, which the government is introducing purportedly in the name of students”.

“The government has ignored the concerns of students, academics and experts across the country who have warned against the introduction of the TEF, arguing that its measurements fail to capture anything about teaching quality.”

She added that until the measurements are addressed, “this ranking system is nothing but a Trojan horse to justify raised tuition fees and treat the higher education sector like any other market, to be ineptly measured and damagingly sold”.

Sally Hunt, general secretary of the University and College Union, also came out against the TEF.

“The TEF is opposed by both staff and student organisations and these results will have little credibility within higher education itself,” she said.
“The fear is that students, beyond the UK in particular, will use these results as the basis for deciding which UK university to attend, which could damage some institutions.”

A gold award in the TEF is given to providers who show the highest quality, silver is awarded for consistently exceeding national quality requirements in higher education, while bronze is reserved for those who meet the national requirements.

Madeleine Atkins, chief executive of HEFCE, said that the TEF measures things that “students themselves say they care about: high-quality, engaged teaching and a supportive, stimulating learning environment which equips them with the knowledge and skills they need to achieve their potential, and then to progress to a good job or further study”.