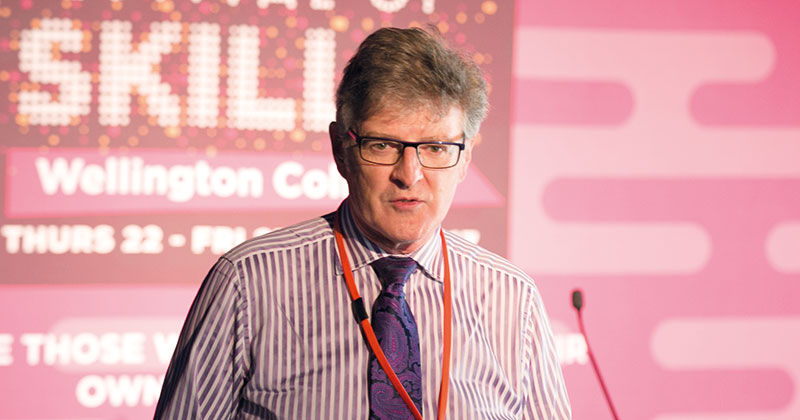 Providers need to assess new apprentices’ skills as soon as they begin training in order to establish a baseline for measuring progress, the education watchdog has said.

Chris Jones [pictured above], Ofsted’s specialist adviser for apprenticeships, explained that the lack of qualifications within new apprenticeship standards has led to an “unintended consequence”: trainers will miss out on information vital for tracking apprentices’ development.

Speaking at FE Week’s Festival of Skills on June 22, Mr Jones said: “If an apprentice is not doing a whole set of units as they go through an apprenticeship then all those measures that we have in frameworks disappear.

“In a progress review with an apprentice, we can’t say ‘make sure next time I come you’ve finished unit 35’ – it isn’t going to work anymore.”

In a couple of years, he suggested, there might not be any be reliable national data to work with for apprenticeship standards.

The percentage of apprenticeships standards without qualifications is expected to rise.

In March, FE Week reported that more than a third of the apprenticeship standards the government had deemed ready for delivery involved no funded qualifications other than a final assessment.

While the standards had end-point assessments in place, they do not provide the apprentices with the chance to accumulate qualifications as they move through their training – as was the case with the previous apprenticeship frameworks, he said.

In light of this, he advised providers in the audience to properly assess students’ skills from the very beginning, so they would have a baseline against which to measure their progress.

Mr Jones added that this needed to go beyond just measuring English and maths, to give a clear indication of how capable the apprentice was in a range of areas relevant to the occupation before they began their course.

“It has to be much more about those starting points – it is vital that providers assess the knowledge and skills that apprentices bring with them,” he argued.

“Too often, currently, the only assessments that are recorded for an apprentice as they start their apprenticeship are their English and maths skills.

“Without qualifications to show a measurement of achievement in skills, what else are we going to use to measure that?”

Establishing a definite baseline would mean “then we all together can make a judgement about how far they’ve progressed from their starting points”.

Mr Jones also said that, for Ofsted inspectors, the importance of learners’ progress was “weighted equally” with actually achieving qualifications.

He spoke twice at the first day of FE Week’s Festival of Skills, part of the Telegraph Festival of Education held in the beautiful setting of Wellington College, founded in 1859 in Crowthorne, Berkshire.

The event was attended by over 3,000 delegates on Thursday June 22 and Friday June 23.

Day one of the festival was introduced by the actor and comedian Hugh Dennis and also included a lively City and Guilds panel quiz debate, chaired by managing director Kirstie Donnelly, who was incidentally celebrating her 50th birthday at the event.

Other sessions were led by Ben Blackledge, the director of education and skills competitions for WorldSkills UK, who spoke on ‘Going for Gold in Apprenticeships’, and FE Week’s very own Nick Linford, who gave his best tips on finding efficiencies in 16-to-19 study programme funding.

Throughout the busy day, delegates were treated to live music, delicious food, including ice cream to match the stunning weather, and a wide range of engaging stands where they were able to meet the festival’s exhibitors.

FE Week would like to thank everyone who attended or who took part and helped to make the occasion such a success.