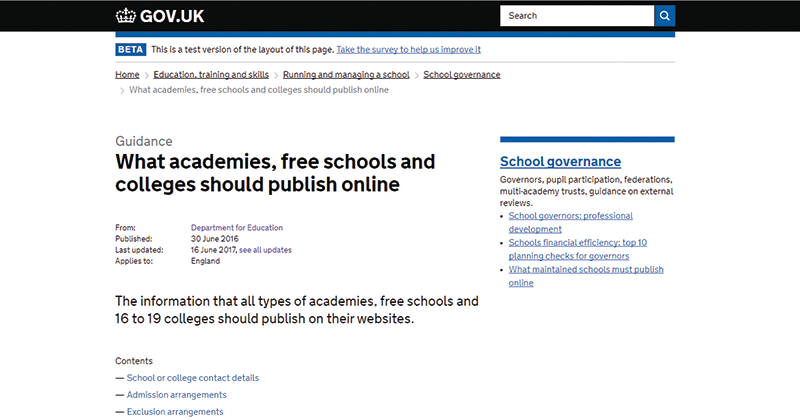 Many colleges aren’t managing to fulfil their legal duties to publish 16-to-18 performance data – apparently because they don’t know they’re required to.

The Department for Education decreed last year that, from March 2017, all providers – including colleges and sixth form colleges – had to publish five new ‘headline accountability measures’ on their websites.

Colleges, however, don’t seem to have got the memo.

When FE Week checked the sites of the 20 biggest general FE colleges this week, we couldn’t find the data anywhere.

We discussed our findings with the Association of Colleges, and its director of education policy David Corke implied in his response that colleges were unaware of the new rule.

“We will be working with colleges and DfE to ensure colleges provide the information needed,” he said.

DfE guidance for all 16-to-18 providers was first issued in June 2016, and outlines the five performance measures they must publish.

Providers must also set out the progress made by learners without at least a GSCE grade C in English and maths in these subjects.

The measures were introduced for the first time in this year’s 16-to-18 performance tables as a way for colleges to assess how well they were doing – and also to compare the performance of different providers.

Colleges must also publish a link to the full performance tables for all providers. This year’s performance tables were issued in January, but did not include all the data until March – which is when the requirement to publish the information came into force.

James Kewin, deputy chief executive of the Sixth Form Colleges’ Association, inadvertently demonstrated the scale of confusion: he himself had been under the impression that the rule was for guidance only, rather than mandatory.

The DfE does not appear to be about to sanction providers for non-compliance; in fact, it appears at this stage to be focusing on spreading the word.

“It is the first year that colleges have been required to publish this data on their websites,” a spokesperson said. “We will continue to work with the sector to increase its knowledge and understanding of what it must publish.”