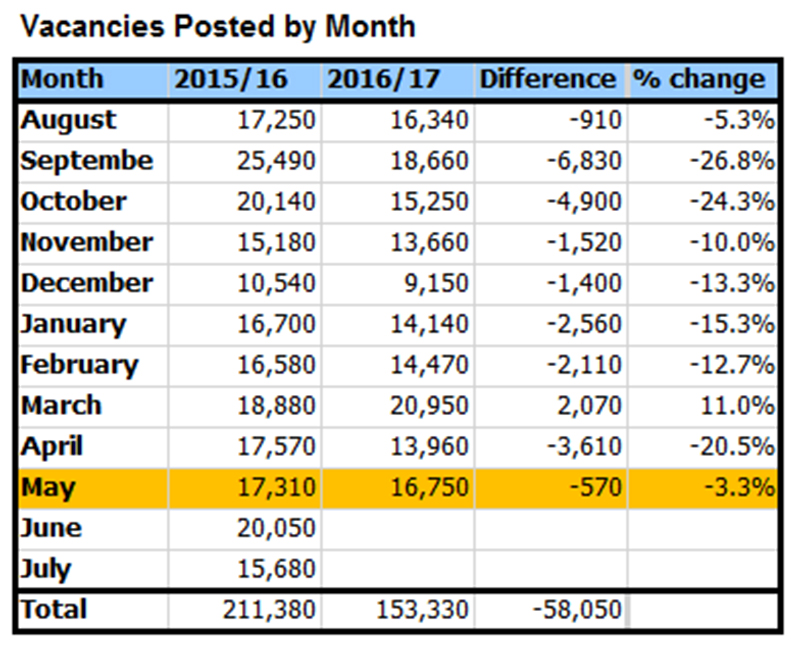 Update 1 : At 17:45 the DfE responded by saying the data they published for May is not full the full month. A Department for Education spokesperson said: “The data published did not reflect the full vacancy figures for May, and was only for the first few days of the month. The updated data covering the whole of May will be published shortly with an explanatory note, as part of the June release.”

Update 2 : At 17:46 the DfE published new apprenticeships vacancy files labeled June, although there were no figures included for June. However, they did include full month figures for May. This article has been amended to include the full figures for May

Latest government figures for apprenticeship vacancies, published this morning, appear to show a fall in vacancies and employers posting them, for the month of May compared to the same month the previous year.

Any reduction will be of concern to those that feared the levy reforms, which went live last month, would result in employers switching their provision to support only existing employees.

AELP chief policy officer Simon Ashworth said: “These figures simply confirm what our members have been telling us over the last few weeks, namely that apprenticeship start figures have plummeted since the levy started.  Levy-paying employers are holding back on their starts and the predicted calamity with the size of the non-levy funding allocations is being realised.

“We are also getting a lot of feedback that employers in some sectors are refusing to pay the 10 per cent co-investment contribution and in other sectors there is definitely a shift to high-value management training rather than highly valuable level 2 and 3 sector-specific apprenticeships.  We hope that the government would want to use our expertise and intelligence to help determine what action needs to be taken.”