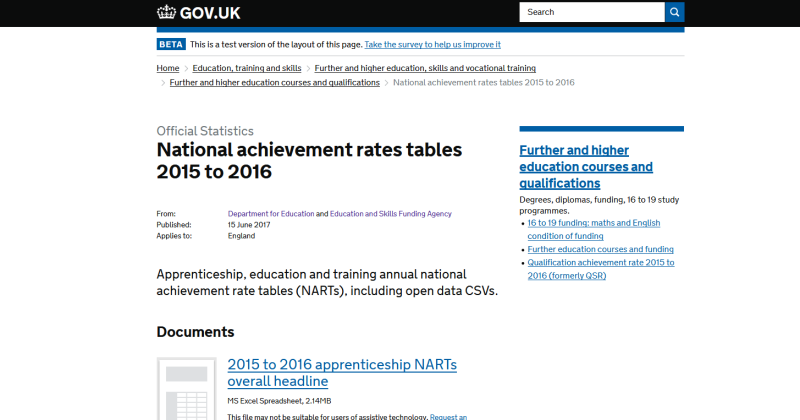 An independent expert in government statistics has called for an investigation after the Department for Education encouraged the use of “misleading” provider apprenticeship achievement rate data, rather than publish the revised figures.

In February the DfE revised its figures for 2015/16, causing a fall of nearly five percentage points in recorded achievement rates, after it admitted closing a series of “loopholes” in the way numbers are reported.

Now, three months on, it has published these revised figures for individual providers – but without the comparable figures for previous years, which are needed to give an indication of providers’ progress.

Jonathan Portes, a professor of economics and public policy at Kings College London, and a frequent commentator on the government’s creative use and presentation of statistics, said the DfE’s failure to be forthcoming with the necessary data was “incomprehensible”.

“These revisions are large and of significant public interest,” he said.

“It is therefore incomprehensible why the DfE – which admits that it has the data – has not published comparable data for 2014-15; even worse, the unrevised data from that year remains on its website, which is clearly misleading.”

Announcing the release, the Education and Skills Funding Agency tweeted “today we published the achievement rates and were asked why last year’s were not published. Different methodology used and to compare would be misleading”. It added that “last year still available”, though didn’t mention that this data uses unrevised figures.

“This is extremely poor statistical practice, and I would encourage the UK Statistics Authority to investigate and ensure that the situation is rectified,” said Mr Portes.

Now that the loophole has been closed, any learners who disappear or do not have a completion status are recorded as a ‘fail’, bringing the overall achievement rate down for a number of providers.

According to FE Week analysis of the NART data released on June 15, 18 providers saw their achievement rates for apprenticeships drop by 30 percentage points or more between 2014/15 and 2015/16 – with the biggest fall coming in at -71.3 points. Half of these were from providers rated ‘good’ by Ofsted.

The NARTs, which cover apprenticeships, education and training, are published annually, but in recent years releases have been subject to delays.

Achievement rate figures for courses ending no later than July 31 the previous year would typically be published in March, but were delayed this year several times, most recently by the general election purdah period.

And FE Week described in December 2015 how the publication of the achievement rates for 2014/15 had been pushed back, with promises that they would be released “towards the end of March”.

They were eventually released in May 2016.

FE Week asked the DfE to explain and defend the lack of comparable data in the latest release of apprenticeship achievement rates.

It declined, though its spokesperson did say that “today’s figures prove that apprenticeships are equipping people with the skills they need to get on in life”.

They added: “We want even more people to gain the quality skills that businesses are crying out for. This is part of our ambitious plan to develop home-grown talent, with record investment in apprenticeships through the levy, and the government’s huge investment in technical education.”

For full analysis of the figures, see next week’s edition.

We asked the DfE to respond to two questions:

Please can you explain why the comparable figures for 2014/15 have been excluded?

How would the DfE respond to the claim that this is a cover-up – to hide the revised figures that would be embarrassing for many providers?

In response, the DfE statement was as follows: “Today’s figures prove that apprenticeships are equipping people with the skills they need to get on in life. We want even more people to gain the quality skills that businesses are crying out for. This is part of our ambitious plan to develop home-grown talent, with record investment in apprenticeships through the levy, and the government’s huge investment in technical education.”

Read the editorial about this facepalm-inducing response here