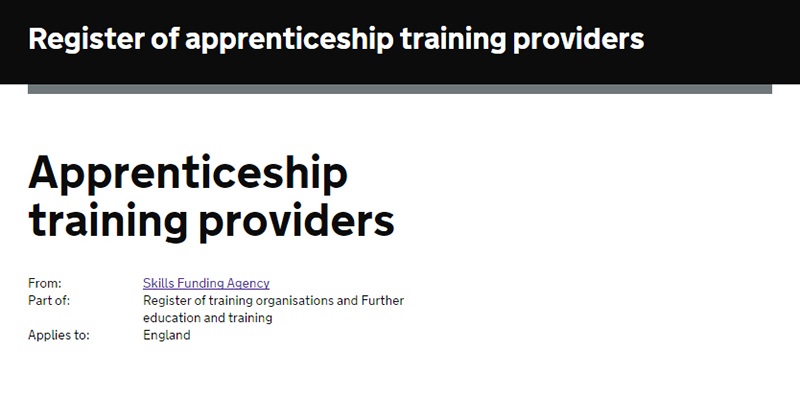 Hundreds of providers including a college from the nation’s second largest city, which largely missed out last time, have made it onto the register of apprenticeship training providers at the second time of asking.

FE Week understands providers have been finding out this morning if they’ve been successful or not, in the second round of applications to RoATP.

The Education and Skills Funding Agency subsequently published the new register this afternoon.

Andrew Cleaves, principal at BMet, told FE Week today: “It has been confirmed that we are on RoATP and we’re really pleased that we can get on with growing and developing our successful Apprenticeship provision with our fantastic business partners.”

Darren Hankey, principal of Hartlepool College of FE, added: “We’re absolutely delighted. We have a long and well-established track record of delivering high quality apprenticeships and this was recognised in our recent Ofsted inspection.

“The employers with whom we work have been unwavering in their support for the college over the last couple of months, and we look forward to working with them, and many new firms, to continue what we do best – delivering high quality professional and technical education.”

West Kent and Ashford College, which was rated as ‘requires improvement’ at its most recent inspection in March, has also told us they’ve been successful in the second round of applications to the register.

Tracy-Anne Barker, group director of business development, said the news “reinforces the quality of our provision and expertise that we have as a provider of apprenticeships across a range of subject disciplines”.

The independent training providers that also told FE Week they have been added so far, are Acacia Training, rated ‘good’ for apprenticeships by Ofsted last January, and Paragon Skills, most recently rated grade three for such training.

Delighted to report that we are on the Register of Apprenticeship Training Providers. Thanks @NickLinford & @AELPUK – keep up the lobbying.

Anne-Marie Morris, assessor at Acacia, said they had “been informed by ESFA that we are on the register which will be updated shortly”.

FE Week reported in March that the former Skills Funding Agency had  published the full list of 1,708 providers on the new register which will be eligible to deliver apprenticeships from May, whittled down from 2,327 applications.

Many colleges with significant current apprenticeship allocations, including Hartlepool College, Birmingham Metropolitan College and Northbrook College, expressed dismay at the time after they didn’t make it.

Exclusive FE Week analysis also found that a number of much smaller providers with little or no experience of running apprenticeships had been accepted.

The shadow skills minister Gordon Marsden told FE Week that the register was “looking like an omnishambles”, and there was widespread concern that no general FE colleges had made it on from Britain’s second largest city Birmingham.

But we revealed in April that after significant political pressure, the Department for Education had quietly added South & City College Birmingham.