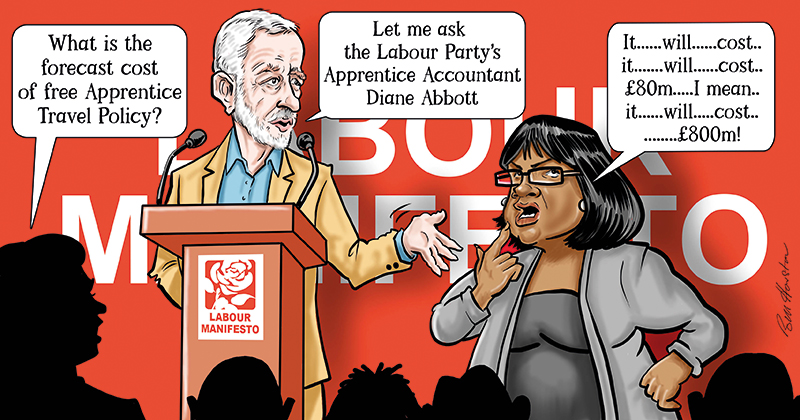 The financial implications of Labour’s pledge to cover apprentices’ travel costs have been called into question, after the Conservatives labelled their costings a “total shambles”.

A leaked draft version of Labour’s manifesto committed to paying for apprentices’ travel costs, “which currently run to an average of £24 a week – a quarter of earnings if apprentices are on the minimum wage”.

FE Week asked the Labour press office to explain how much this would cost in total – as £24 per week works out at around £1,200 per apprentice every year, and the travel costs of all 899,400 apprentices who participated last academic year would therefore amount to just over £1 billion.

This week, he told us that the “still-to-be-finalised” manifesto pledge would only actually cover transport for 16-to-19s, at a cost of around £99 million in the first year.

Nevertheless, a Conservative Party spokesman claimed this was demonstrated that “Labour’s manifesto is a total shambles”.

Mr Marsden told FE Week: “The precise figures are still to be worked out, but we would be looking to assist 16-to-19 apprentices, at least on 50 per cent of the average figure that is being quoted, for travel costs and hopefully moving forward”.

He explained that the figures “were based on the number of 16- to 19-year-old apprenticeship starts on last available data from March 2016”.

Asked why only starts had been factored in, when it’s natural to assume that all apprentices of that age-range would want to receive the payment, he replied: “The initial scheme will be based on new starts, and we would go from there.”

By our calculations, the total number of 16-to-19s reported as participating in apprenticeships between August last year and January was 156,800. Going by the shadow minister’s reckoning, if that were doubled and multiplied by £1,200, the final cost would work out at £376 million, or £188 million if halved.

This is the latest election commitment problem to hit Labour.

Shadow home secretary Diane Abbott came in for some stick last week for struggling, during an interview on national radio station LBC, to explain how much putting an extra 10,000 police officers on the streets would cost.

Presenter Nick Ferrari asked how many children would be affected and criticised Ms Rayner for her reply, that it was a “significant” number.

“This equates to a quarter of the salary of an apprentice who is earning the apprentice national minimum wage,” he said.

NUS president-elect Shakira Martin told us this week: “I, and the [NUS-run] NSoA are delighted Labour included a commitment to supporting travel cost.

“It is especially exciting this commitment has come directly from NSoA’s research. When there are some apprentices paying over half their wages on travel to and from their apprenticeship, it is clear the current financial support apprentices receive is not fit for purpose.”