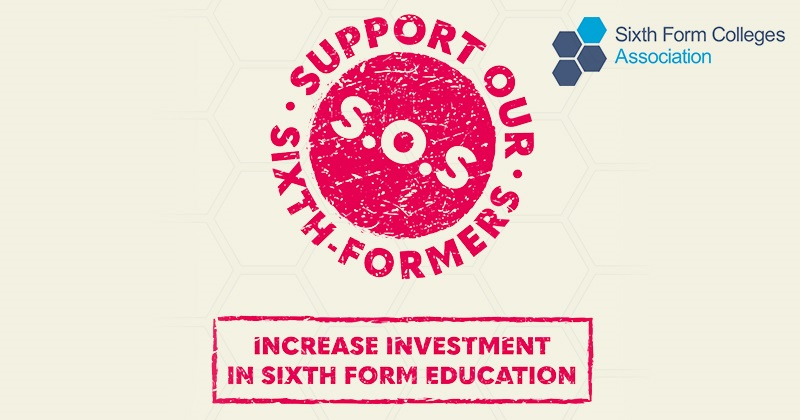 An extra £200 funding per sixth form student should be given to improve the support providers can offer these learners, the Sixth Form Colleges Association has urged.

It made the call as part of its Support our Sixth-formers campaign and as the key demand in its 2017 general election manifesto, both launched today.

The additional investment would pay for improved mental health support, study and employability skills and careers advice – all vital services that sixth form providers have had to scale back on thanks to “chronic underinvestment”, the SFCA said.

It’s one of four recommendations in the association’s manifesto aimed at boosting investment in sixth form education.

Bill Watkin, SFCA chief executive, called on all political parties to back the campaign and its manifesto recommendations.

“Increased investment is now urgently required to ensure that students pursuing A-level and other academic qualifications receive the sort of high quality education and support they need to become healthy, happy, resilient and productive citizens,” he said.

The association is also calling for a wider review of sixth form funding, as it said there was a “disconnect” between the cost of delivering an academic curriculum and the cash providers were given to do this.

It is also urging the government to scrap VAT for all sixth form providers.

A long-running SFCA campaign calling for SFCs to be brought in line with school sixth form providers, which don’t pay VAT, resulted in the announcement in 2015 that SFCs could convert to academy status to avoid paying the tax.

But the SFCA is now pressing the government to extend this to all SFCs.

The association’s final demand is for a competitive process for establishing new sixth form provision.

“The absence of a competitive, demand-led process has led to the creation of sixth form providers in areas where there is already an oversupply of good or outstanding provision,” it said in the manifesto.

Geoff Barton, general secretary of the Association of School and College Leaders said: “All political parties must commit to addressing, as a matter of urgency, the severe underfunding of sixth form education.

“Schools are being hit by rising costs but the situation in post-16 education is even more serious because these pressures come on top of funding cutbacks in the last parliament.”

The SFCA’s manifesto demands come after the Association of Employment and Learning Providers last week called for a commitment to four million apprenticeship starts, alongside at least £1 billion guaranteed funding for non-levy apprenticeships.