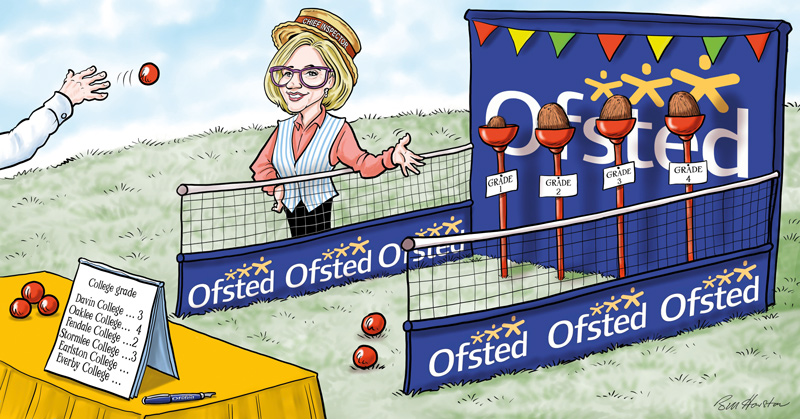 The number of colleges with top marks from Ofsted has fallen to its lowest ever level this week, after Blackburn College slumped to a shock grade three.

New analysis by FE Week has uncovered a downward grading spiral for general FE colleges over the last 10 years.

Just one college has received an ‘outstanding’ grade, across the 124 full inspections that the inspectorate has carried out since the latest Common Inspection Framework (CIF) was introduced in September 2015.

The overall percentage of general FE Colleges with a grade one has now fallen to just 13 per cent, or 26 out of 205 colleges.

The number of colleges graded either ‘outstanding’ or ‘good’ has also fallen to a record low, of just 69 per cent.

This grading spiral has happened despite several mergers over the last two years, which saw several poorly performing colleges removed from the stats as they joined their better-graded neighbours.

Colleges had been hoping that the inspection regime might soften under Ofsted’s new chief inspector Amanda Spielman – something that has so far not materialised.

David Corke, director of education and skills policy at the Association of Colleges, said it was “clear” that Ms Spielman is “fully committed” to inspecting colleges based on evidence but that it would take time for her to introduce changes to the new CIF.

“The CIF predates [her] arrival and it takes time to introduce changes to an existing framework which is deeply linked to current government policy,” he told FE Week.

An Ofsted spokesperson insisted that under Ms Spielman’s lead, Ofsted would continue to “treat the FE sector with the same rigour, and with the same regard to the evidence, as any other area we inspect”, adding: “That is what colleges and their students deserve.”

The latest college to lose its grade one was Blackburn College, which crashed to ‘requires improvement’ in a report published April 4. It had not been inspected for nearly a decade.

Two other former ‘outstanding’ colleges, Bury College and Holy Cross College in Manchester, were also revisited earlier this year after 10 years without inspection and both found themselves tumbling to grade threes.

The only college to be given a grade one since the new CIF came into play has been Truro and Penwith College in Cornwall. Its report, published in April last year, saw Ofsted return the highest possible rating for six headline fields, including leadership and management, quality of teaching, learning and assessment, outcomes for learners, and 16-to-19 study programmes.

Ms Spielman, who took the reins from Sir Michael Wilshaw in January, has made it clear that the inspectorate would consider scrapping the ‘outstanding’ grade now she is in charge.

She told MPs on the education select committee last June that getting rid of the rating was “something I would like to see fully discussed”, following criticism that FE providers and schools are given a false impression when they’re labelled with it.

But in an interview with FE Week editor Nick Linford in March, Ms Spielman said that although there were “many cuts possible” to Ofsted grades, the trade-offs “have to be looked at and you have to have some degree of acceptance by all stakeholders involved that this is going to serve the various purposes”.

She added that she didn’t see the removal of grades “as something for me with my scythe and armour”.