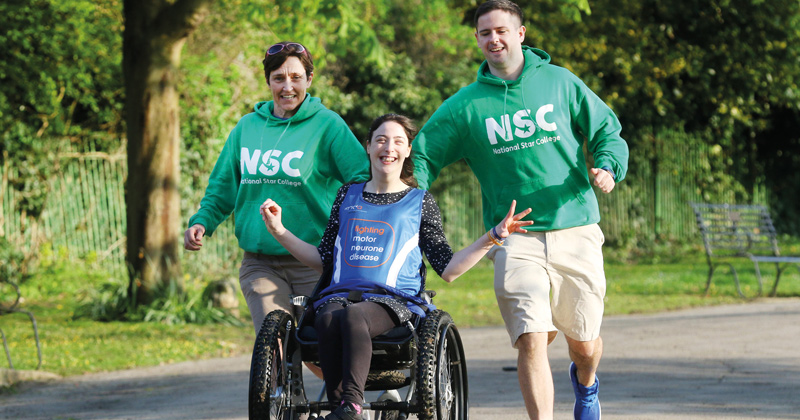 Two members of National Star college staff helped a student realise her dream of completing a marathon by pushing her 26 miles in an all-terrain wheelchair.

Bethan Griffiths, a 22-year-old student at the college who has cerebral palsy, wanted to complete the Brighton marathon in memory of her mum Amanda, who died last year of motor neurone disease.

Her cause resonated with college staff, Becky Amor and Andy Woolway, who have both had close family members affected by the disease.

The team of two took turns pushing a £5,000 wheelchair loaned to them especially for the marathon – with Bethan crossing the finish line on foot.

Becky, who is a physiotherapy assistant at National Star, has run 19 marathons since 2012 but admitted running with a wheelchair made this her most challenging.

Bethan has now raised more than £900 for the Motor Neurone Disease Association through the marathon. Speaking of her experience, she said: “Being a part of a marathon is always something that I’ve dreamt of doing but never thought I’d get to do.

“I mentioned it to Becky during a physiotherapy session at National Star. Becky didn’t say I couldn’t do it. Instead she said she would figure out a way we could.”