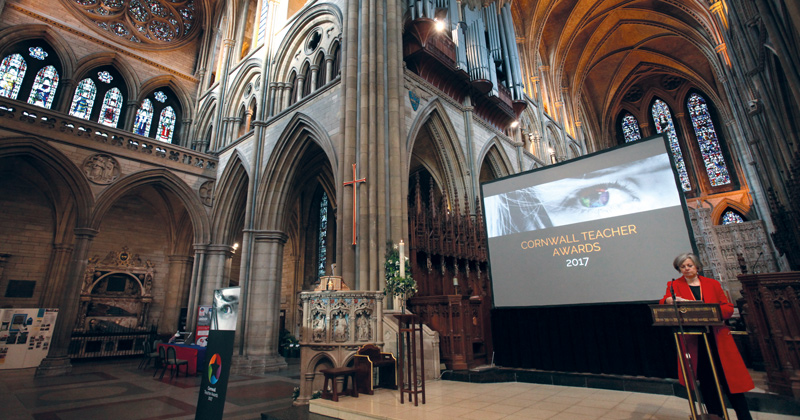 Hosted at Truro Cathedral by BBC Radio Cornwall’s Daphne Skinnard, the Cornwall Teacher Awards recognise excellent educators across 13 categories, with accolades up for grabs such as the Lifetime Achievement Award, Outstanding Headteacher and Governor of the year.

Truro and Penwith College – judged outstanding by Ofsted in its most recent inspection – beat schools and providers to the top spot for Educational Support Worker of the Year, Special Educational Needs Teacher of the Year and Employer Engagement Initiative of the Year.

The collection of accolades was quite the contrast to the college’s entry to last year’s awards, which they left empty-handed. Clive James with his award

Three Truro and Penwith lecturers also battled it out for Outstanding FE Lecturer of the year, with the accolade going to the college’s deputy team leader for English, Clive James. Mr James, who started working at Truro and Penwith just this year, was shortlisted alongside colleagues Dr Sue Skuse and Hannah Smith.

Explaining their choice, judges said he was “someone who makes the students feel as if they have achieved something in every lesson, someone who has made a subject that is sometimes thought of as ‘dusty’, relevant to modern life and inspired his students to study the subject at University.”

Speaking to FE Week, Mr James said “The evening was really valuable for the profession. It was nice to be there alongside primary and secondary schools, and to get a wider view of education in the area.

“I was surprised and honoured to win the award. I always want to make sure that when my students leave the room they’re still talking about the subject and thinking about it all the time. I want my subject to go beyond the walls of the classroom.

“I was really pleased that my colleagues were nominated alongside me. It was more a team thing and I’m really lucky in my department, we have a great team.”

The award for Employer Engagement Initiative was collected by the college’s public services team, in recognition of their commitment to taking students to visit local businesses, to give them a taste of how things work outside the classroom.

Special Educational Needs Teacher of the Year went to Sophie Rollason, in recognition of the impact she made to students through the Expressive Arts curriculum, both in the college and the community. Shane Mann speaking at the awards

The title of Educational Support Worker of the Year was awarded to science technician Kayley-Ann Raymond, who was praised for “going the extra mile to provide amazing support to colleagues”.

Now in its second year, there were nearly 300 nominations for the awards, with 37 teachers, governors and support workers making it to the shortlist.

The college was the only FE institution to enter this year’s awards, going up against multiple schools, including Pool Academy, Treviglas Community College and Brannel School.

Keynote speaker at the event was Shane Mann, managing director of LSECT and publisher of both FE Week and Schools Week newspapers who supported the event. Speaking at the awards, he praised the work of educators in the area, saying “Cornish teachers turn around children’s lives”.