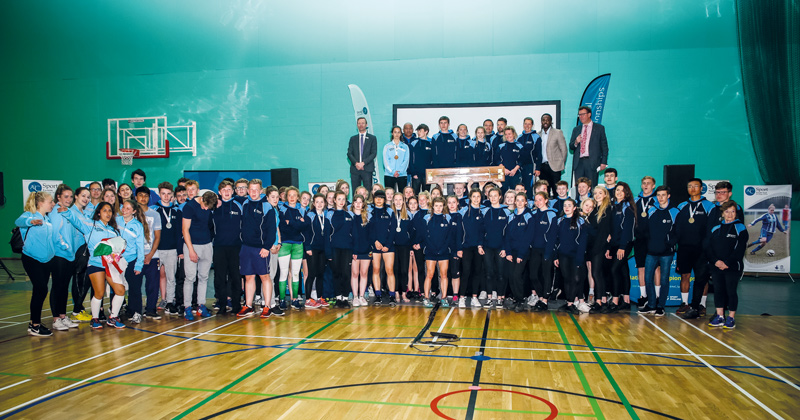 There was a shock result at last weekend’s 39th AoC Sport National Championships after the south-east claimed the coveted Wilkinson Sword for the first time in seven years.

The team (pictured above) – who were runners-up in 2016 – wrestled the title off their local rivals the south-west, reigning champions for three years in a row, finishing a whopping 22 points clear.

The sought-after Wilkinson Sword is awarded to the region that accumulates the most points across individual sports over the national championships weekend.

Around 1,650 college students from 10 regions across England and Wales competed in this year’s event in Nottingham, which is described as the “pinnacle of the college sporting calendar”.

FE Week reported live on all of the drama from the 13 sports on show, including football, table tennis, netball, basketball, rugby and hockey.

Helping the south-east to top spot was the men’s team captain Mahamed Mahamed,from Itchen Sixth Form College, who won gold in the men’s cross-country for the third successive year.

He then claimed a second gold as he led the way for his region in the cross-country team event, again pipping the south-west into second place.

“We came here pretty confident, but the standard is so much better than last year.”

The bronze medal position was contested by another set of local rivals, the west midlands and the east midlands.

The west came out on top, with outstanding performances from Newcastle-under-Lyme College in the men’s volleyball, who snatched and-grabbed a last-second winning point against Middlesbrough College, representing the north-east, to claim gold.

Daniel Wells, from Lincoln College, also impressed by emphatically taking gold for the east midlands in the men’s squash.

But his victory didn’t come easily, as the north-east’s Oliver Walls, from Queen Elizabeth Sixth Form College, put up a fierce fight in the final.

Being played in one of only four all-glass squash courts in the country at the University of Nottingham’s David Ross Sports Village, Oliver took the first set of the match much to the frustration of Daniel, who furiously smashed and broke his racket on the floor in anger at his early performance.

After clearing his head Daniel approached the second set with much more grace and eventually came out on top. The south-east won the Wilkinson Sword for the first time in 2008 – 27 years after the national championships launched in 1979.

But the region went on to win it for four years in a row after, until 2012, when the south-west claimed dominance.

Pip Stewart, a south-east women’s hockey player from Peter Symonds College, who won a bronze medal, said winning the Wilkinson Sword back from their neighbours was an achievement she will “never forget”.

Jordan Jarrett-Bryan, a former Paralympic basketball player who is now a TV sports reporter, was the evening’s compere and got the competitors hyped up for the competitions with tales of his sporting experience and competitions to see which region could make the loudest noise. Loughborough Gymnastics Club then had spectators on the edge of their seats with a daring but perfectly executed routine.

Each of the 10 competing regions then presented their personalised flags, followed by the reading of the AoC Sport National Championships oaths, before AoC Sport chair Mark White officially declared the games open.

A closing ceremony, with presentation of the Wilkinson Sword, finished proceedings off on the Sunday.

Mr White told FE Week afterwards: “We’ve had a marvellous weekend. I’ve spent three days watching real enthusiasm and excellence in the students from colleges, who have competed with such passion and such talent. I’ve enjoyed every minute of it.”