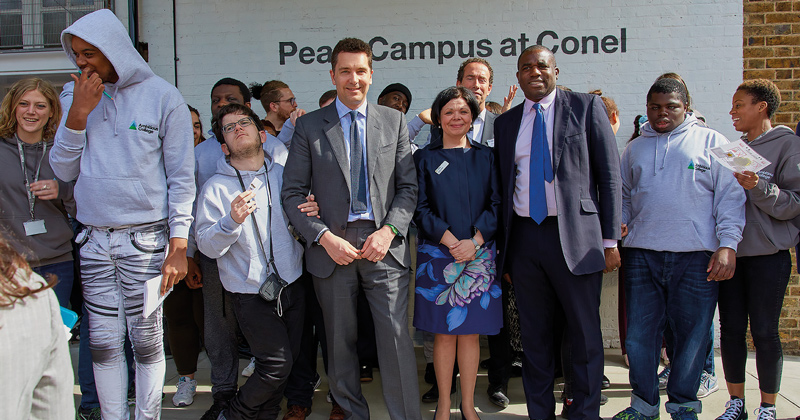 Operating across two campuses in Tottenham and Isleworth, Ambitious College is the first specialist day college solely for young people with autism, catering for those between the ages of 16 to 25.

After operating out of temporary accommodation for more than two years, charity Ambitious About Autism raised enough money to take Ambitious College to a more permanent home, with two campuses colocated within mainstream colleges, the College of Haringey, Enfield and North East London (CONEL) and West Thames College.

The new college’s Pears campus (colocated with CONEL) first opened its doors to a small number of learners in September 2016, and has already received an award for its impact on the local community. Also in attendance was Trevor Pears from the Pears Foundation, the lead partner of Ambitious College.

Ambitious About Autism hopes to raise a total of £4.4 million to fully establish the college and continue its work, and is £1 million away from its target. The appeal has already garnered support from broadcaster Jon Snow, John Bercow MP and author Nick Hornby, and has received donations from Sir Harvey McGrath and Baroness Dido Harding, the chief executive of TalkTalk.

“Through the model we have, we can support our colocated partners – West Thames and CONEL – to become more autism confident. In doing that, it makes it easier for young people with autism to enrol on courses there so it’s a win-win. That was important for us,” said the college’s principal Vivienne Berkeley.

“It’s a real symbiotic relationship. The more autism-confident mainstream providers get, it opens the world of learning opens up much easier for young people with autism.” Across its two campuses, Ambitious College currently has around 44 learners, with plans to expand its student numbers over the coming years.

“Complex autism means our learners have a diagnosis of autism and a further diagnosis of a learning disability,” said Ms Berkeley.

“Having a day provision rather than a residential one means we can keep young people in their local communities and develop opportunities for them here.”

The charity has released figures showing that only one in four young people with complex autism progress to further education.

The college day starts at half-past nine and finishes at four, with a total academic year of 48 weeks; the majority of learners come to the college five days a week.

Edward Timpson cut the ribbon to officially open the college.

“Ambitious about Autism should be congratulated for leading the way in providing this type of education provision for young people with autism in London,” he said. “I hope that there are many more colleges like this in the coming years.”

Do you want to be in campus round-up? If you have a story you’d like to see featured, get in touch by emailing samantha.king@feweek.co.uk