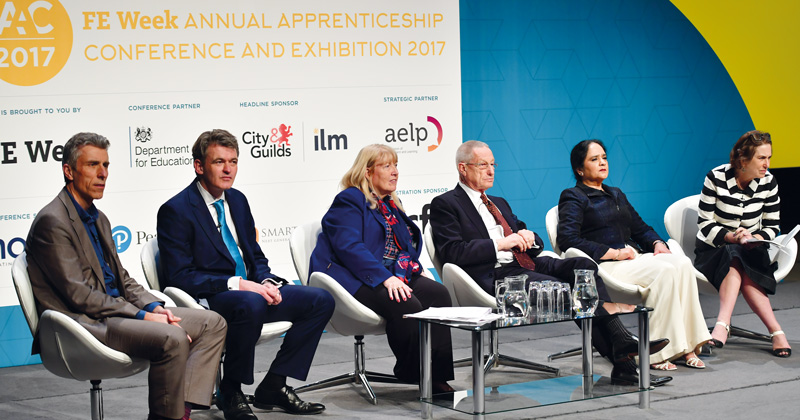 Concerns about quality and the impact of reforms on social mobility dominated the panel debate of FE and skills sector leaders at the Annual Apprenticeship Conference.

Dame Asha Khemka DBE, principal of West Nottinghamshire College and a member of the board of the Institute for Apprenticeship, called for the sector to “work together to find solutions”, admitting that “we all know implementation is going to be rocky”.

However, she said the fact that so many standards’ end-point assessments were not yet in place was “not acceptable”.

Her fellow panel member Dr Sue Pember, the director of policy at HOLEX, described the lack of EPAs for approved standards as “diabolical”. “In my mind”, she said, “you shouldn’t put a standard on the books unless it’s got an EPA”, a position that was met with warm applause from delegates.

Replying to a question about whether the levy would lead to an increase in deadweight provision, which would use levy funds to pay for training that would already have taken place, Dr Pember said “deadweight is a word I don’t like to hear very often; it reminds me of Train to Gain”.

We all know implementation is going to be rocky

John Hyde, the executive chairman of HIT Training, warned that an increase in the use of levy funds to pay for “existing management training and degree sandwich courses may skew it too far”.

He insisted that entry-level apprenticeships and those for 16- to 18-year-olds “are still needed” and urged the government to “keep a close eye on it”.

David Hughes, the chief executive of AoC, said “we should go into this open-eyed; sometimes there will be scams and scandals”, but was careful to insist this wouldn’t apply to the majority. He also warned that the levy might “amplify” the behaviour of “unscrupulous” employers, noting that “the labour market is just grossly unfair and unjust, and the levy won’t solve that”.

Mark Dawe, the boss of AELP, asked whether the system could truly be considered employer-led when employers weren’t free to select the provider that they wanted to work with, as not all providers were on the register of apprenticeship training providers.

“Don’t distort the market through a procurement process that doesn’t recognise quality,” he insisted.