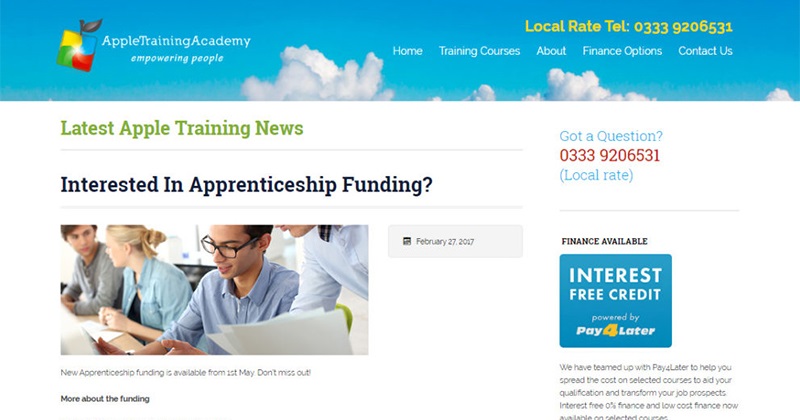 Update, November 1, 2017: The company has now confirmed to FE Week that it is continuing to operate, following a change of ownership.

A private training provider is on the new Register of Apprenticeship Training Provider despite having ‘ceased trading’.

Hertfordshire-based Apple Training Academy is listed as a main provider on the list published by the Skills Funding Agency, but is understood to have gone out of business this month.

FE Week has been unable to contact Apple Training Academy directly, as the provider’s phone is longer working and our emails have not been answered.

However, a spokesperson for the provider’s accountants, Lawrence and Company, confirmed it had ceased trading and was currently going through insolvency.

Apple Training Academy is not listed on the SFA’s current Register of Training Organisations, nor does it appear on the SFA’s subcontractor list.

It also hasn’t been inspected by Ofsted.

According to its website, which is still up and running, the provider offered a range qualifications in health and social care, child care, business and management, and training.

These are all offered at full-cost, with finance options available.

However, a news story dated February 27 indicated that Apple Training Academy would be offering apprenticeships from May (pictured).

“New apprenticeship funding is available from 1st May. Don’t miss out!” it said.

The story went to say that Apple Training Academy was “really excited to be able to offer” apprenticeships in a number of areas, including child care, adult care and management, from levels two to five.

The provider’s Facebook page is full of comments from angry customers who have lost money, having paid for training but not received it.

One such comment said: “Myself and my company are out of pocket to the sum of nearly £3000 in course fees – I have tried to contact our allocated account manager as well as the person responsible for the finances but to no avail. Come on Apple Training Academy….you must do your duty and return ALL course fees to those like us who paid our fees, in good faith but have not received any call backs whatsoever.”

According to Companies House, Apple Training Academy was set up 2011, and has two directors listed – Julie and Adrian Cook.

Julie Cook’s LinkedIn page said she was director of learning at the provider from January 2010 until March 2017.

She is also a councillor for Amersham Town Council.