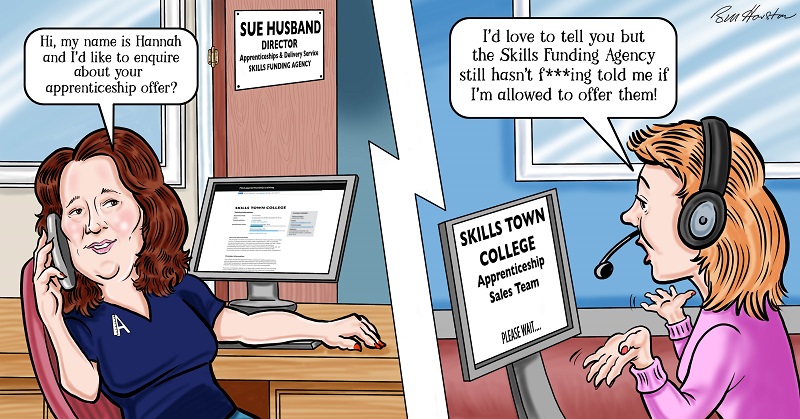 FE Week readers are up in arms about the Skills Funding Agency’s new mystery shopper scheme to test apprenticeships, because many of them don’t even know when or if they’ll be able to start delivering their own.

The SFA announced its new initiative in its online update on March 8, and said it would use undercover tactics to help identify “any further support the sector may need to be ready to meet employer demand” shortly after sweeping apprenticeship reforms launch in the coming weeks.

Our story on the plan, which went online that day, provoked a very angry reaction from readers, most of whom reckon the SFA would be better off making sure it is itself ready for the reforms.

Their ire was compounded by another story that day – which revealed that the SFA had cancelled a key meeting meant to decide how much money providers would be allocated in non-apprenticeship levy employer funding.

No alternative date has been scheduled, and it should have followed the results of the latest applications to the new Register of Apprenticeship Training Providers, which has also not seen the light of day.

The let-downs were all too much for our readers, with Jon Carr taking offence at the SFA’s claim that its mystery shopper scheme would help it understand what the sector needs.

“Further support? Perhaps telling providers if they have a contract would be a good start,” he said.

Bob Smith, meanwhile, wrote: “It’s a bit rich this isn’t it!?!? I don’t think the SFA are even prepared fully themselves, never mind checking on us. I’m expecting a full on disaster scenario once the reforms kick in. I don’t know any college or training provider that is fully prepared and there will be a fall out.”

Another poster, who identified himself only as Norman, added: “Hilarious and what a cheek.

“The reason many aren’t ready is the lack of clarity and guidance from the SFA, Institute for Apprenticeships and the unceremonious rush to get the new reforms in, despite common sense and experience saying we need more time!”

The reforms will come into force after the apprenticeship levy in April, and employers are being given far more influence over the design and funding of apprenticeship programmes.

Many in the sector have asked whether the SFA is ready for the changes, and fear ministers are rushing them through without proper concern.

FE Week employed its own in-house mystery shopper back in November, to test out the government’s directory of apprenticeship training providers, which had been launched the previous month.

The website, entitled ‘Find Apprenticeship Training’, was described as a one-stop shop for any employer, large or small, which wanted to take on apprentices, and we found it relatively easy to use.

We asked the Department for Education if its own mystery shoppers would be in-house employees or hired from outside, but received no response before going to press.