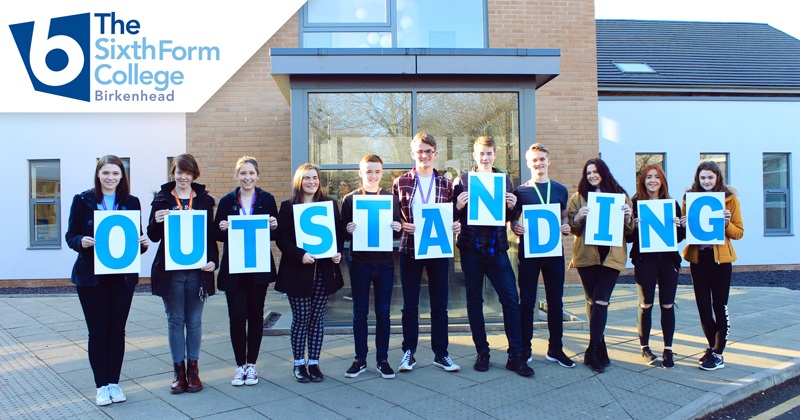 A sixth form college in the north west has become only the second in the country to be rated outstanding by Ofsted under the common inspection framework.

Birkenhead SFC received grade ones across the board – up from its previous grade two – in a glowing report published Monday (January 30).

The verdict means that Birkenhead now joins Huddersfield as the only SFCs to have been given the highest possible rating from the education watchdog since September 2015, when the new CIF was introduced.

Inspectors, who visited in December, praised leaders at Birkenhead for their “unrelenting focus in developing high expectations” of staff and students – with the latter becoming “young adults with a thirst for learning” as a result.

The 1,400-learner SFC’s performance on English and maths was found to be “exceptionally strong”, with “a very high proportion” of learners enrolled on GCSEs in these subjects “improving the grade they gained at school”.

The report noted: “The vast majority of students on A-level courses make excellent progress from below average starting points, achieve their qualifications, improve their confidence and self-esteem and are motivated to progress to higher-level courses, training or employment.”

Overall achievement rates were “high and have improved each year since the college’s last inspection” in 2012, which was attributed to “highly effective teaching, support and guidance”.

“Teachers are skilled, enthusiastic, highly committed and dedicated to supporting their students,” the report said.

Outcomes for learners were also found to be positive.

A “very high proportion” go on to university, “many of whom are the first in their family” to do so, and the “vast majority” of those not going on to higher education move on to work or an apprenticeship.

“A central very successful focus of the college is on improving the personal development and employability skills of all students,” the report said.

Just two areas were singled out for improvement by inspectors – improving achievement on the “very small minority of underperforming courses”, and the “small minority of students with an insufficiently wide understanding of diversity”.

Kathryn Podmore, Birkenhead SFC principal, said she was “absolutely delighted” at the verdict.

“The report is a credit to both staff and students and reflects the passion, commitment and relentless hard work that goes on every day to ensure that the highest standards and excellence are attained in all aspects of its work,” she said.

She said the SFC’s English and maths success in particular was “based on getting the students to have belief in themselves and also to aim high, to have those aspirations that they can achieve, and through hard work they can actually get there”.

Mike Kilbride, deputy principal, added: “There is no secret to being outstanding: just have superb staff, work really hard, be thoughtful and reflective in everything you do and never let go of the details.”