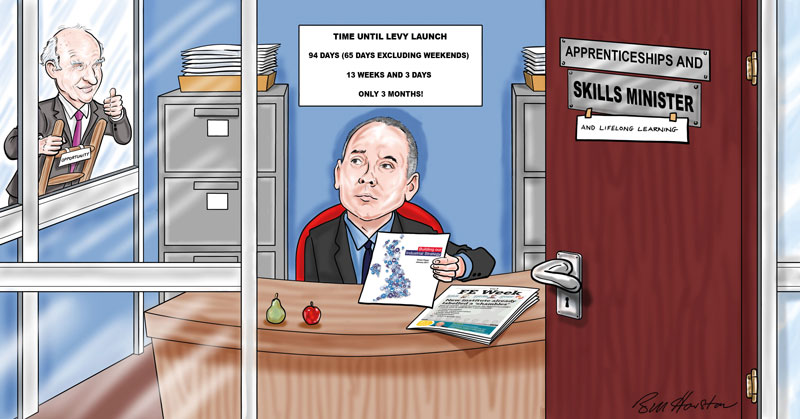 Lifelong learning is firmly back on the government’s agenda, according to the skills and apprenticeships minister Robert Halfon, who says the government’s new industrial strategy includes provisions for adult education.

The green paper released on January 23 acknowledged a “growing challenge” with training for older people, and committed to exploring “ambitious new approaches to encouraging lifelong learning”. Proposed measures could include ways to make the training costs people face “less daunting”, and provide better information to ensure older people who are retraining learn the skills that are actually needed by employers.

“We wouldn’t have put this in the industrial strategy if we weren’t serious about it,” Mr Halfon told FE Week, just a week after more than 60 MPs wrote him a letter calling for more commitment to adult learning.

“At the moment government and I are looking at it in terms of how does it meet skills needs, how do we help the socially disadvantaged, how does it work for the modern age,” he said.

According to government figures, there are around 1.5 million fewer adults aged 19 or over participating in adult FE than there were during the Labour MP David Lammy’s stint as minister between 2007 and 2008, when the figure stood at 3.75 million.

There are around 1.5 million fewer adults aged 19 or over participating in adult FE than there were during the Labour MP David Lammy’s stint as minister

Asked whether it was fair to say that the government had neglected this important policy area while concentrating on 16 to 19 learning, Mr Halfon dodged the question, replying: “This has not just been an issue for this government. In terms of skills in general it has been the same story over 20 or 30 years.”

It is also so far unclear whether there will be an adult skills strategy, or a lifelong learning framework.

“It will fit in the framework of government priorities,” he said, “meeting our skills deficit, helping the disadvantaged, ensuring that people get jobs. Those are the priorities.”

In his first speech to colleges last November, Mr Halfon said that the wider sector “is essential for social justice – ensuring that individuals from the lowest-income backgrounds get on the ladder of opportunity and benefit from the best education and skills training”.

Former business secretary Sir Vince Cable, who is currently working on a research project for the National Union of Students into how FE reforms should be tailored for learners, welcomed the new commitment to adult education.

He said: “One of the things that I managed to save from the Treasury when I was in government was adult community learning. That kept quite a lot of the part-time, non-accredited learning that is the basis of proper adult education.”

He added that the work done for such learners was “wonderful”, and that any further support for providers was to be welcomed.

Mr Lammy has told FE Week: “While I do welcome the commitment to exploring new approaches to lifelong learning, and I know the minister does share my concerns, this is an urgent issue that has been ignored by successive governments.”

Former top skills civil servant Sue Pember, who is now director at adult learning provider membership body Holex, said: “It is good news this is being given such prominence in the industrial strategy.

“We would like to see any lifelong learning framework addressing the poor basic skills of the workforce, support those with low skills into further training and start preparing those who are at the risk of losing their present jobs because of technological advances into learning new skills.”