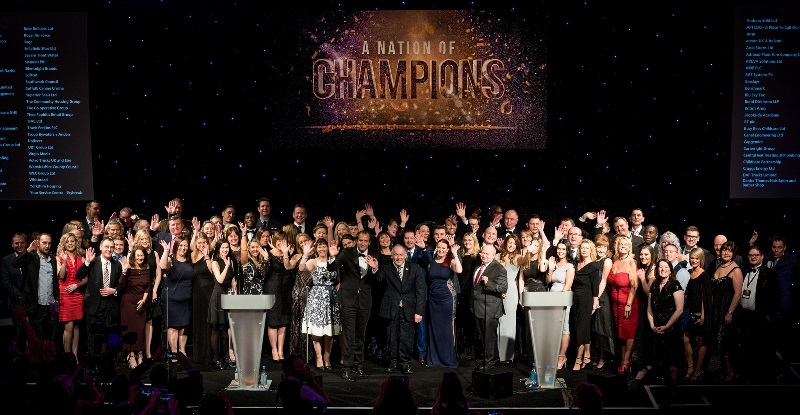 The winners shared their thoughts on what the awards meant to them and what could be on the horizon as they continue to drive forward with their promising careers.

Here they are in their own words…

I-Can Qualifications Award for Intermediate Apprentice of the Year

Hairdressing and nail services at Exceed Training Academy and Salon

“At first I was a little bit overwhelmed, but now I’m quite proud of myself. My friends and family congratulated me and my clients are very happy, so it’s nice to know that I’ve achieved something that everyone’s proud of.

“When I left school I came straight to the salon that I’m in now asking for a job. I started on Saturdays and then when September came I started training. I’d definitely advise others to go down the apprenticeship route, because you get rewarded for it and you’re able to be in the working environment so much of the time.

“The biggest thing I’ve learned so far is my people skills and customer service. You don’t really speak to people of all different ages when you go to school – I now speak to people who are everything from under 20 to over 60, all sorts of ages of men and women.

“It can get very busy sometimes working at Exceed, there’s a lot to do. But I do love it, I love working with the clients and we’ve got a great team.

“I’m planning to keep moving forward with my training in the future. I’d also like to teach other people how to do what I’ve done.”

EAL Award for Advanced Apprentice of the Year

“It was quite a surprise to be honest with you, a bit of something special. I didn’t really expect it.

“The ceremony was amazing. I went last year as a part of a team because we won the Brathay 2015 Challenge. I can remember saying then ‘I wish my Dad could be here’, because I knew he’d be blown away by the whole thing. Then there I was, 12 months later, sat there with my Dad as well. I think it was a big shock to him and I think he’s feeling quite proud, because he’s given me a lot of support.

“I think taking part in the Brathay Apprenticeship Challenge in 2015 will have played a big part for me in winning. I was team leader and over six months we raised the profile of apprenticeships to MPs, employers and the public through organising conferences, meetings and talks and visiting schools. We also worked to raise 1.25 tonnes of food for a local food bank and over £8,000.

“At Sellafield I was in the apprentice council for my first year and then I was chairperson for the second year. That was great because they have the council to get apprentices views back to the employer, so we had the chance to change the foundation of what next year’s apprentices would learn and work on.

“At school everyone seemed to be forced down this route where it’s university or nothing. But my Dad asked if I’d thought about an apprenticeship, and it was about the time when apprenticeships were starting to be pushed again, so I went onto the government website and I’ve ended up here.

“The art of self-reliance is the best thing I’ve learned so far, in my situation moving away from home it wasn’t just about coming and learning on a job it was also about being on my own for the first time and dealing with all those new things – council tax, bills, cooking, cleaning – running and managing my own house.

“Sellafield have pushed me every step of the way and given me opportunities which I don’t think any other employer really would do. I’ve completed my foundation degree now and I’m hoping to go onto my bachelor’s degree.”

“It was great to celebrate apprentices’ achievements at the awards ceremony. It was really inspiring to hear everyone’s story and get the real point across about apprenticeships.

“I took my mum and my dad and a colleague from HR who was in charge of me when I was an apprentice. They were absolutely delighted with it all. They’ve seen my highs and lows in completing the apprenticeship, so it was rewarding for them to see what I’ve been working towards.

“I was so shocked when I won. I have tried to promote apprenticeships more by speaking to different publications and running events, and to speak out for women in engineering because I think it’s really important. I’m also really dedicated to my work at JCB.

“People are just not informed enough about apprenticeships, they don’t have the right information given to them at the age they should be given it. They aren’t told enough about engineering either, they don’t really know what it is. Like any industry, it has really changed over the years. Young people aren’t given enough guidance about which careers can lead of from which subjects, which is highly important.

“With an apprenticeship you are learning and earning at the same time, and the learning is clearly linked with the practical work. I was the first intake at the JCB academy, so when I finished my GCSEs I wanted to go straight down a career path, I was ready to move on. The JCB Academy was opening that year so I went and did engineering there. I got to work with lots of different companies doing different subjects too, but JCB really stood out for me and luckily by then they were starting their first year of hiring apprentices, so it all fell into place.

“I’ve learned a lot about working within a global industry. It’s vast, you’re taking in so much in a day and you don’t even realise. It is so diverse and fast-paced which is something I like being a part of.

“Hopefully in the future I’ll be looking to go on and do a Masters, once I’ve finished my chartership to become a chartered engineer. I want to get as much experience within the business as I can.”