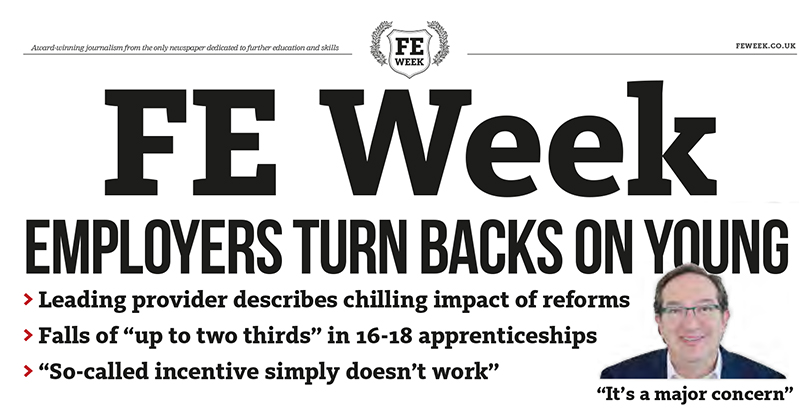 The government must make a “clear and unambiguous” commitment to 16-to-18 apprenticeships, after a major provider warned that funding changes will cause its starts for that age group to plummet by two thirds.

The claim was made by Jon Graham, chief executive of JTL, which specialises in training for the building services engineering sector, in an exclusive article for FE Week.

“Unbelievably,” he wrote, “the government may be about to chop away that first rung with its new funding system for apprenticeships,” referencing the skills minister Robert Halfon’s new ‘ladder of opportunity’ slogan.

Mark Dawe, the boss of the Association of Employment and Learning Providers, backed the claim, and told FE Week that JTL was “one of many providers” which had made it clear that 16-to-18 engagement would tumble once the apprenticeship levy launches.

Under the pre-levy standards funding regime, which will be in place until the end of April, financial incentives offered by the government for taking on a 16- to 18-year-old apprentices can be worth up to £5,400.

But the incentive will fall to just £1,000 per apprentice from May, which Mr Graham warned would cause a “complete change-around in its provision” away from 16to-18s at JTL.

The provider was allocated £15,149,256 for younger apprenticeships by the Skills Funding Agency for 2016/17, and currently has over 6,300 electrical, plumbing, heating and ventilating, and engineering maintenance services apprentices.

Three quarters of these are aged 16 to 18 – but Mr Graham expects that number to drop to around 25 per cent once the levy comes in.

He wrote: “Our employers say when the traditional age differentials in funding rates are removed, they would sooner employ people aged 19 and over.”

Mr Graham explained that while present funding incentives made it worthwhile taking on younger apprentices, who have less established work habits and lack skills like driving licenses, £1,000 wouldn’t be enough to entice employers to take them on.

“Our level three apprenticeships typically last four years. That equates to £5 a week,” he wrote.

Mr Dawe said: “We really need now a clear and unambiguous statement from the government that it’s fully committed to supporting apprenticeship opportunities for 16- to 18-year-olds, with appropriate levels of incentives kept in place.”

Teresa Frith, senior skills policy manager at the Association of Colleges, said: “We share the concern that the funding changes might reduce demand from employers for younger apprentices.”

A DfE spokesperson said it wants “to encourage employers to take on young people”.

“We have also increased funding for STEM apprenticeship routes by 40 per cent at level two to encourage more young people to undertake training in these vital subjects and increase quality.”

Analysis by FE Week carried out last summer showed that the new £1,000 incentive, combined with wider ‘upper limit’ apprenticeship funding levels – overall funding stood to drop by up to half in many deprived areas.

Our findings sparked mass outrage, which was channelled through our #SaveOurApprenticeships campaign, and helped convince the skills minister Robert Halfon to announce plans to pay an extra 20 per cent on funding band limits for the age group.

Labour’s former skills minister David Lammy, an outspoken #SaveOurApprenticeships backer, called this week on the government to “come clean” about how badly the cuts will still affect younger apprentices.

Mr Halfon has previously told FE Week that he “absolutely” doesn’t accept that starts will fall, “because we’re giving the incentives to the employers and providers. We’re doing everything we can to encourage them to employ young apprentices”.

Calls for extra funding for this age group gained prominence in 2011, through the influential ‘Review of Vocational Education’ published by Professor Alison Wolf, who was unavailable for comment this week.

It recommended employers who take on 16- to 18-year-old apprentices “should be eligible for payments (direct or indirect)… when they bear some of the cost of education for an age-group with a right to free full- time participation”.

Employers are telling a large and successful provider of 16-18 engineering apprentices they will switch to adults once the funding reforms kick in.

Most 16-18 frameworks see a significant rate cut from May, and for the first time employers with 50 or more staff will have to pay for them.

Then there are the new replacement apprenticeship standards, which offers no age specific incentive to the provider.

Plus, according to Jon Graham at JTL, the £1,000 16-18 employer incentive is proving nowhere near enough to persuade them to take a young person over an adult.

As I suggested to Robert Halfon last year, the loss of a ring-fenced 16-18 budget means there is little the government can do to stop the funding switch to adults.

The minister, who has so far proved to be a good listener to sector concerns, needs to take action quickly.

He should remember too that the Conservative Party stressed in its 2015 manifesto it was committing to the creation of 3 million starts by 2020, so “young people acquire the skills to succeed”.

We can’t wait for a Technical Education reform magic pill from 2019.

The DfE must step in and take back some control now, else there will be tens of thousands of disappointed  young people in just a few months from now.