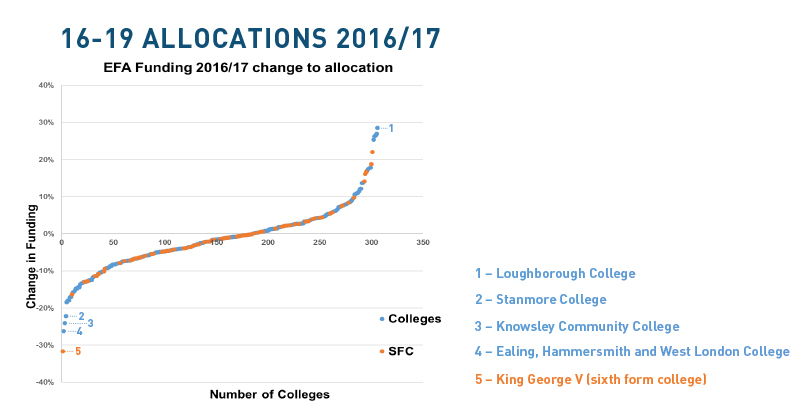 Three colleges have seen the funding they receive for 16- to 19-year-old learners drop by more than 20 per cent since last year, according to the latest figures.

The Education Funding Agency 2016/17 allocations, published in November, shows that funding has fallen by 2.2 per cent across the sector as a whole compared with 2015/16.

However, for more than a dozen colleges, the picture is rather more stark, with drops of 10 per cent or more.

FE Week analysis of EFA stats show that the worst-hit college is Ealing, Hammersmith and West London College, which suffered a year-on-year drop in its EFA cash of a whopping 26 per cent – alongside a similar drop in learner numbers.

A college spokesperson said the fall was a result of “consolidating and improving the quality of provision and financial sustainability”, which had “been essential for future growth”.

The college declined to elaborate on what it meant by “consolidating”, in light of this massive drop in funding.

For some colleges, however, EFA funding has skyrocketed.

A spokesperson for the college said the rise was due to the growth of its sixth form.

Stats show that the worst-hit college is Ealing, Hammersmith and West London College, which suffered a year-on-year drop in its EFA cash of a whopping 26%

“Loughborough College is the largest A-level provider of its kind in Leicestershire, offering a wide range of academic subjects to young people in a new, multi-million pound development with the very latest teaching and learning facilities,” she said.

Other colleges losing out on large amounts of EFA funding include Knowsley Community College and Stanmore College.

Knowsley’s current allocation is 24 per cent lower than last year’s, and its learner numbers have fallen by 27 per cent, while Stanmore’s allocation and student numbers have dropped by 22 per cent and 19 per cent respectively.

A Knowsley spokesperson said its fall in EFA funding and learners was “attributable to the college taking a decision to reduce its 16-to-18 subcontracting arrangements in 15/16”.

Meanwhile, a Stanmore spokesperson blamed its current administered status along with the increasing number of local schools offering sixth forms for the fall in 16- to 19-year-old learners.

She insisted that recent improvements at the college are “already generating a substantial upturn in 16-to-18 learner applications for 2017/18”.

FE Week’s analysis was extrapolated from a presentation made by Peter Mucklow, the director for young people at the EFA, who told delegates at the Association of Colleges conference in November that “pretty much everything is two per cent down” in terms of funding for 16 to 19-year-olds for 2016/17.

In addition, some institutions have had their allocations reduced for not fully meeting the condition of funding rule.

This rule, which was introduced in 2014/15 and is being applied to allocations for this first time this year, saw 26 general FE colleges lose a combined total of more than £2.8 million.

The planned removal of formula protection funding, worth £54 million, was another factor cited by Mr Mucklow.

King George V College, a sixth form in Merseyside, had the worst funding change of all, with a cut of 32 per cent.