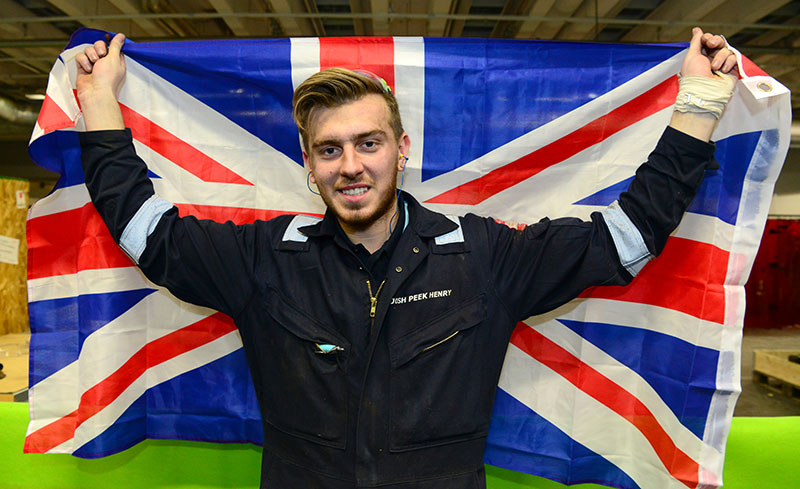 The haul places Team UK ninth out of 28 in the overall medal table. Landscape gardening duo Adam Ferguson, aged 20, and Will Burberry, 20, were joined by welder Josh Peek (pictured above), 20, in claiming the top prizes in this year’s skills competition.

Their teammate Danielle Scandone was then awarded silver for her stunning floristry designs.

The 21-year-old, who trains at Merrist Wood College in Guildford, also took home the team’s ‘best of nation’ award for scoring the highest points out of the UK competitors. Bronze medals went to 21-year-old cooking competitor Ruth Hansom, who works at The Ritz Hotel in London, and mechatronics pair Sam Hillier, 23, and Thomas Revell, 24, who both work for Toyota Manufacturing UK. Eight other members from Team UK achieved a medallion of excellence for reaching the international standard in their skill.

Other Team UK members to claim the medallions were painting and decorator Jordan Jeffers, 21, from Southern Regional College, 21-year-old hairdresser Lucy Knight, who owns her own salon ‘Hair by Knight’ in Bristol, plumbing competitor Daniel Martins, 19, from employer Briggs and Forrester, and beauty therapist Isla McLarty, 19, from City of Glasgow College. The team’s celebrations actually started yesterday after 20-year-old 3D game designer Daniel McCabe bagged a gold medal. But his award is not counted in the final medal tally as it is classed as a presentation skill.