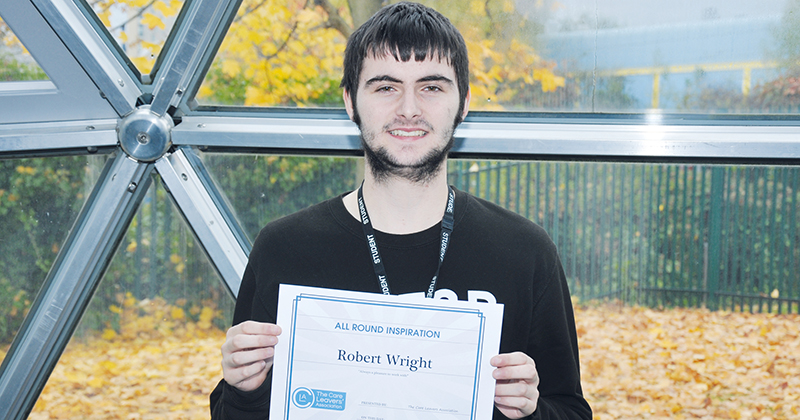 A student at Salford City college has won the title of ‘all-round inspiration’ at the Greater Manchester Care Leavers’ Awards.

Robert Wright took the top accolade, along with £100 worth of vouchers, for his volunteering work.

He has volunteered for five years with young people at the YouCan Community Club and also volunteers at the British Heart Foundation in Eccles. Alongside this, he is also a member of the Salford Youth Council.

It isn’t the first award Robert has won for his extra-curricular work; he has previously received an award for ‘outstanding volunteer’ from the Salford City College Annual Awards, as well as a medal for his involvement with YouCan community club, which won the Queen’s Award – the equivalent of an MBE for voluntary groups.

Held at the Royal Northern College of Music, the awards aim to recognise the achievements of young carers across the region.

Award categories included community and volunteering, sport, leisure and apprenticeships, with the ceremony culminating in the final award for being the ‘all-round inspiration’.

Speaking of his newest accolade, Robert said: “All-round inspiration is a very prestigious award and it’s another reason why this has been such a brilliant year!”