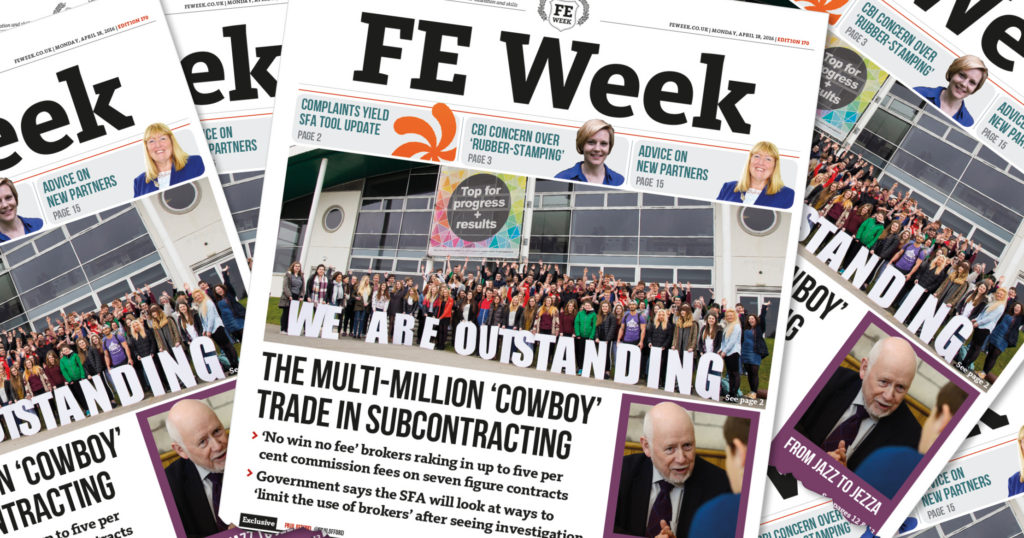 The use of public funds to pay brokers’ fees will be banned, thanks to an award-winning FE week investigation which forced the Skills Funding Agency to take action.

Our exposé of this secretive industry in April (pictured) – the first of its kind – blew the lid on the underhanded way in which brokers matchup subcontractors with government funded providers and earn millions by charging up to five per cent commission on any agreed deal.

When it was first presented with compelling evidence, the SFA said it would “review” funding agreements in an effort to “limit the use of brokers”.

However, following an inconclusive answer from the agency in September when we first checked in on this review’s progress, FE Week asked again after our investigation won the prestigious CIPR award for Outstanding Further and Vocational Education Journalism last week.

This time, the answer was crystal clear: civil servants now plan to wipe out the practice.

“The SFA is strengthening the rules so that from May 1, 2017, no government money can be used to pay brokers’ fees,” an SFA spokesperson said, warning: “We will take action against any provider we find has broken these rules.”

Brokerage is not specifically mentioned in the draft apprenticeship funding rules for training providers, which will also apply from May 2017, but the Department for Education confirmed that it would be covered by section 67.11.

It states: “Funds in an employer’s digital account or government-employer co-investment cannot be used for specific services not related to the delivery and administration of the apprenticeship; including company induction, bespoke or additional training or assessment not needed to meet the apprenticeship requirements.”

Mark Dawe, the boss of the Association of Employment and Learning Providers, welcomed the SFA’s newly tough stance.

“With the levy’s arrival and the new subcontracting rules, no one should complain if brokerage fees become a thing of the past.

“As much public money as possible should be reaching frontline delivery and in this respect the apprenticeship reforms should make a very positive difference.”

David Hughes, head of the Association of Colleges, agreed, saying it was “good to see them delivering” on the initial pledge the SFA made to FE Week seven months ago.

“As the apprenticeship levy changes start to be implemented, it is important that the SFA, alongside the new Institute for Apprenticeships, monitors the system to ensure there is no abuse,” he said.

Our April investigation found a number of brokers advertising subcontracting opportunities through closed groups on LinkedIn.

In one notorious example of the practice, FE Week found an advert with Essex-based consultants EEVT Ltd, attributed to a company called The Funding Brokers Ltd, which we tried unsuccessfully to contact.

The advert said: “We have been providing this service for over three years, securing in excess of £100m in the process for our clients.”

At five per cent commission the brokers could have earned up to £5 million over this period.

The ad continued: “We work on a no-win no-fee basis, whereby we will provide our support free of charge to the point of contracting.”

Birkenhead-based funding4training was one of the few brokers found with an official website.

Its services were also publicised by Essex-based consultants EEVT Ltd.

One of its newsletter adverts stated that its five per cent broker fee was “negotiable depending on the provider”. The firm’s director of sales and business development, Benn Carson, told FE Week at the time that his firm was different to other, more disreputable competitors.

He said: “There are a lot of cowboys doing this work and it’s easy to be tarnished with the same brush, which is why I set myself high standards and make sure the presentation is right, by running a professional looking website.”