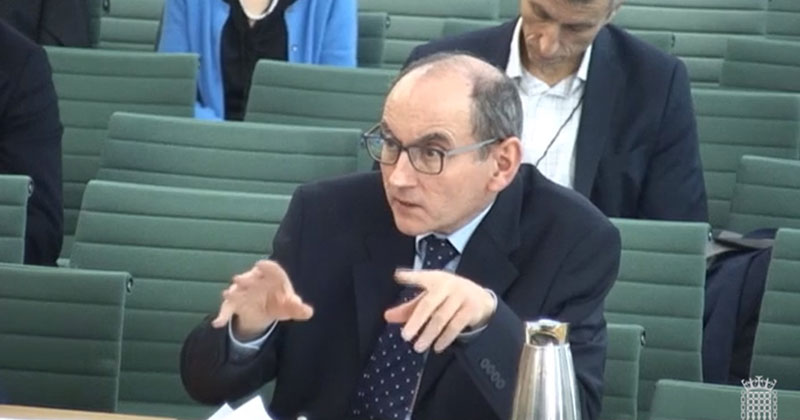 Answers have finally been given to key questions over staffing levels for the new Institute for Apprenticeships.

The body, which will play a key role in policing apprenticeships and technical education, will have around 90 employees once it is fully up and running.

The figure was revealed by Peter Lauener (pictured), shadow chief executive of the institute, during a committee hearing for the new Technical and Further Education Bill this morning.

He disclosed that the body would have “around 60 employees” when it launches in April next year.

He added: “The planned running costs next year are about £8m, but the number of staff will need to build up as the additional responsibilities – subject to the department – are added, and that will probably be another 30 or so staff.”

The question was posed by shadow skills minister Gordon Marsden, who accused Mr Lauener and apprenticeships and skills minister Robert Halfon of being “rather coy” about giving out the information.

Previous probes by shadow skills minister Gordon Marsden about the number of people who will work for the institute had been dodged by ministers.

He told Mr Lauener, who is also in charge at the Skills Funding Agency and Education Funding Agency, that “we’ve had to rely on rumours and leaked papers” about staffing levels.

These included a leaked document called ‘BIS2020 — Finance and Headcount outline’, seen by FE Week in May, which indicated that the IfA would take on 40 employees in 2016/17 — and the number would not increase over the next three years.

This morning’s hearing was part of the committee stage for the Technical and Further Education Bill, following its second reading in the House of Commons on November 14.

The bill proposes to introduce an insolvency regime for colleges, to allow them to go bust, and to extend the remit of the Institute for Apprenticeships to cover technical education.

Other witnesses giving evidence during this morning’s session included Lord Sainsbury, who led the panel that resulted in the proposals put forward in the government’s new Skills Plan, and Association of Colleges’ chief executive David Hughes.

Mr Hughes defended colleges’ track record on apprenticeships, after FE Week revealed that they were delivering a smaller proportion than a year ago.

He said that colleges needed “stability and certainty” rather than “constant change and churn” to be able to invest in apprenticeships.

“We’ve had a blizzard of changes over the last 10 years, 15 years perhaps, and that causes my members and others to be cautious about the investment that they make,” he said.

“And I think that’s the biggest risk to all of this – the lack of certainty to the future,” he warned.

She raised concerns about the low number of contact hours that FE learners have, and stressed the need to be “realistic” about what could be achieved in two years for those following the technical route without further investment and resources.

Ian Pretty, chief executive of the Collab Group, suggested that the insolvency regime and Skills Plan – which is set to replace over 20,000 post-16 courses with “15 high-quality routes” – should have been introduced before the current area reviews of FE education and training institutions.

“We’ve spent a huge amount of time on the area-based reviews, a lot of displacement time there,” he said.

“If we’d had the Skills Plan in place and the insolvency regime in place, I think the ABR process might have been a smoother process because there would have been a logic to it then.”