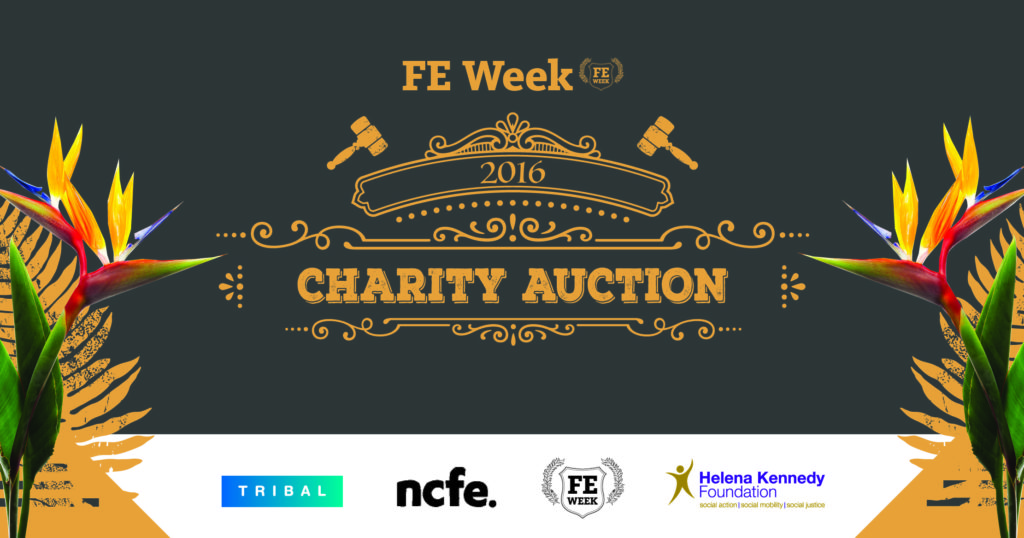 A last-minute donation from the new FE commissioner pushed the total money raised at the FE Week 2016 annual charity auction past £14,000 – breaking the previous record.

Richard Atkins made the generous donation of £120 at the end of the event on the first evening (November 15) of the Association of Colleges conference in Birmingham.

All proceeds will be going to support the Helena Kennedy Foundation, a charity which provides financial support and mentoring to disadvantaged FE learners.

His predecessor Sir David Collins had also earlier pledged £500 to the  cause.

“It was wonderful to see the great and good from the sector being so generous through the auction in support of a wonderful cause,” said Shane Mann, the managing director of the company that publishes FE Week, after bidding was completed on an evening that had been kindly supported by Tribal and NCFE.

“It’s fantastic that after six years the auction remains the main event for the first night of the conference,” he said, adding that he had been “overwhelmed” by the number of people who wanted to attend the event.

Guests at the auction enjoyed a sumptuous three-course meal before bidding on a number of luxury items.

These included a trip on a hot-air balloon, a bottle of champagne signed by the skills minister Robert Halfon with an FE Week cartoon signed by him and the Labour MP David Lammy, and a stay at the Hyatt Hotel in Birmingham with tickets to see BBC’s Strictly Come Dancing live tour show.

Entertainment for the evening was provided by the CK Gospel Choir, who had the entire audience on their feet by the end of an uplifting performance.

The traditional raffle added an extra element of fun to the evening’s proceedings, with guests popping balloons to find tickets inside them in order to find out if they had won a prize.

A ‘pledge-o-meter’ offered attendees a rather more hi-tech way to give generously, with iPads placed on each table allowing guests to donate digitally.

As an extra incentive, Ruth Sparkes, the director of education at PR firm EMPRA, offered an Apple Watch as a prize if pledges passed the £1,000-mark. This target was smashed easily by the largesse of the guests.

Earlier in the evening, Dr Ann Limb, the founder of the Helena Kennedy Foundation, spoke about the vital work the charity does, and introduced two of its beneficiaries – Hally Nguyen and Alan Tien.

Alan, a former student of Birmingham Metropolitan College, spoke movingly about how the foundation had helped him on his way to achieving his dreams, after he became homeless at the age of 18 following a family breakdown.

“I’ve managed to overcome my homelessness and I’m now more positive about my future,” he said.