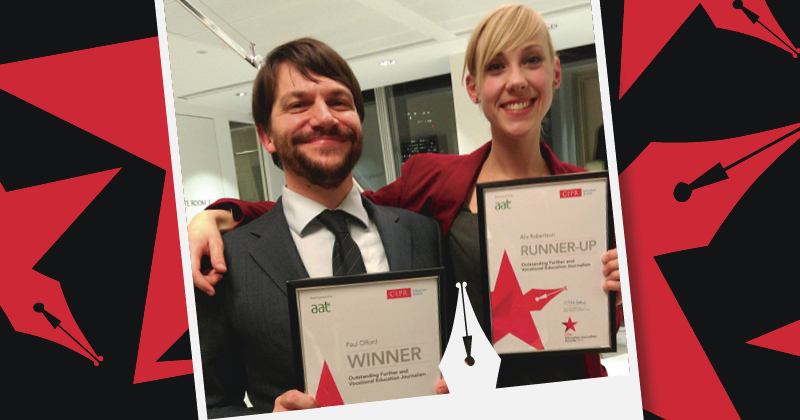 Paul was rewarded for his exclusive investigation into brokers taking millions in government funding meant for front-line training, with judges commending him on demonstrating “the importance of good contacts” and “holding senior bodies to account”.

Alix took second place for her series of features into the Saudi Arabia colleges of excellence programme, which judges deemed “an arresting read, and a very powerful account of how asking challenging questions can result in the right thing being done.”

FE Week’s Jude Burke and Billy Camden (reporter for both FE Week and Schools Week) was also shortlisted for an award in the Most Promising Newcomer category.

Now in their twelfth year, the awards celebrate the best and brightest education and skills journalists for the academic year 2015/16, and attracted entrants from The Guardian, TES, Financial Times, ITV and BBC News.

Schools Week Editor Laura McInerney was shortlisted in the category for editorial excellence.

Editor of FE Week, Nick Linford, said: “Last night was well deserved recognition for our talented reporters as well as for both newspapers and all of the team.”

Managing director of Lsect, the publisher of Schools Week and FE Week, Shane Mann, added: “Nick and I were proud and honoured to see our journalists’ hard work recognised and celebrated.

“So many guests at the awards were full of praise for both newspapers – these moments offer an opportunity to reflect and appreciate how much we’ve achieved in such a short space of time. In six years we have become the go-to place for news in the education and skills sector.”