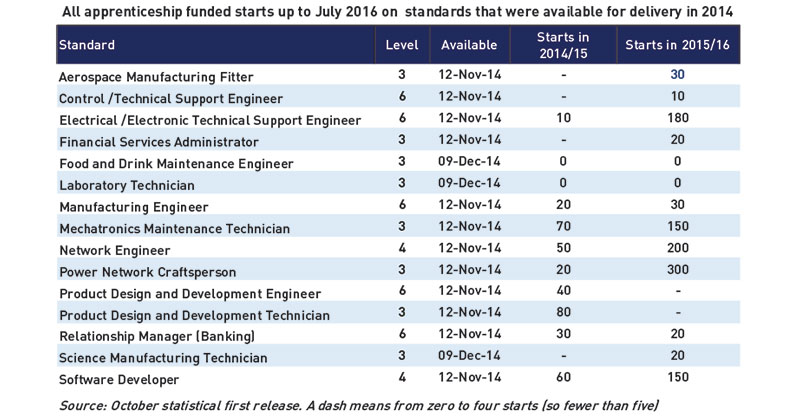 Government meddling has meant that students didn’t start on some apprenticeship standards for two years after they were launched.

We found two had no starts at all in that academic year or in 2015/16, while low numbers of students were recorded in several others.

The National Skills Academy for Food and Drink took a lead role developing one of the apprenticeships which had no learners, for food and drink maintenance engineers.

Justine Fosh, its chief executive, laid the blame for squarely at the door of the government.

She said employers involved with the trailblazer group led by NSAFD, which developed the standard, had been “frustrated by the evolutionary nature of the government’s decision making process for approval”.

“We were advised at the start that this new and innovative approach was called ‘open policy-making’, whereby new ideas were tested to see if they worked or not.

“Unfortunately policy implementation does not lend itself well to this approach and valuable employer time and effort has been spent unpicking decisions made as policy decisions have firmed up.

“This has led to redrafting, reworking and lost time, such that the industry has written to the new skills minister, requesting that the Department for Education implements a far more structured and clear process for the future.”

She claimed that the standard had not actually been ready for apprenticeship starts until the start of this academic year, though “at least 60 students that I know of” have started since September.

When asked to explain more about the causes of the delays, Ms Fosh pointed to confusion surrounding the assessment plan.

The first one, she said, to be initially approved Wincluded detail on the mechanism of the end assessment”.

“In the first approved version, 40 per cent of the grade that the candidate would achieve resulted from the score for the qualification that they undertook on programme – i.e. they could take their score from the qualification into the assessment room,” she said.

“But subsequently the Department for Business Innovation and Skills decided that on-programme qualifications could not form part of an end assessment. As a result we had to redo the assessment plan.”

FE Week contacted a number of employers involved with developing those standards which had had few or no starts over the past two academic years.

They all declined to comment on why they did not take on apprentices themselves.

The DfE told FE Week in October that a change in policy would in future “require all groups of employers bidding to develop a standard to commit themselves to using it”.

In response to Ms Fosh’s complaints, a DfE spokesperson said: “We expect to see starts on employer-led standards increase over the course of this parliament as providers and employers adapt their delivery models towards new standards.

“The open policy-development approach towards standards and assessment was adopted to ensure that input from employers and other stakeholders could be taken into account along the way so that all new standards deliver the skills that they need.”