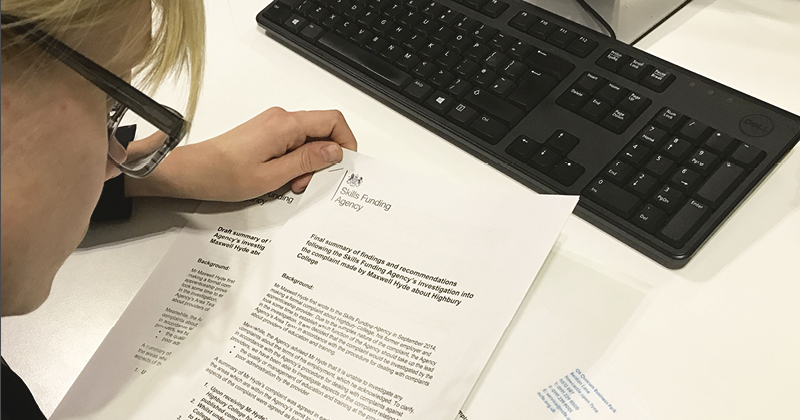 Allegations of malpractice lodged by a former apprentice of Highbury College are being investigated by Ofqual, an FE Week investigation has revealed.

Portsmouth in September 2011, and who went on to work there as a workshop instructor from January 2013 until May 2014.

He completed his apprenticeship, but claims that during the process he was granted qualifications for courses that he did not take.

The SFA has previously opted to “partially uphold” another of Mr Hyde’s complaints against the college – in which he alleged his apprentice progress reports were falsified – in a report released in October 2015.

An Ofqual spokesperson told FE Week that it is currently “reviewing the actions carried out by the awarding organisations” involved – VTCT, Laser Awards and NCFE – but that it won’t be investigating the college.

Mr Hyde submitted a freedom of information request to the Skills Funding Agency in February, which indicated funding had been paid out for courses he claimed to have no knowledge of, for example on preventing contact dermatitis and substance misuse awareness.

Funding had been paid out for courses he claimed to have no knowledge of, for example on preventing contact dermatitis and substance misuse awareness

“Sadly it seems to me that students are seen as little more than cash cows, and provided the correct boxes are ticked and funding is obtained, no one cares how this is achieved,” he told FE Week.

NCFE revealed it had conducted its own investigation into the complaints in June – which concluded the certificates Mr Hyde felt he should not have been awarded had been built into other parts of his apprenticeship.

It said: “Qualifications awarded to Mr Hyde by NCFE were completed as additionality qualifications which were delivered during Highbury College’s induction programme.”

Laser Awards and VTCT also confirmed that they have been carrying out investigations into the claims.

Mr Hyde alleges that Highbury College had wrongly indicated that the progress reports had been completed with his input, despite the fact that in some cases he was allegedly out of the country.

The SFA report said: “There is no suggestion the college has committed any kind of fraud, but not ensuring the learner is demonstrably involved in his own reviews was bad practice on behalf of the college.

“We note that the college has committed to improving its processes.”

Mr Hyde told FE Week that he had taken up his concerns with Stella Mbubaegbu, the principal of Highbury College, who told him that her managers “had acted properly”.

A Highbury College spokesperson said: “The allegations raised with the SFA by Mr Hyde were in the first instance investigated by the college in line with college procedures.

She added: “Mr Hyde has reported the college to a number of awarding bodies and on each occasion, where requested, a report including the scope and outcome of the internal investigation was submitted by the college in response to each enquiry.

“On all occasions the awarding bodies have been satisfied with the way the college handled the complaint and the outcomes of the investigation.”