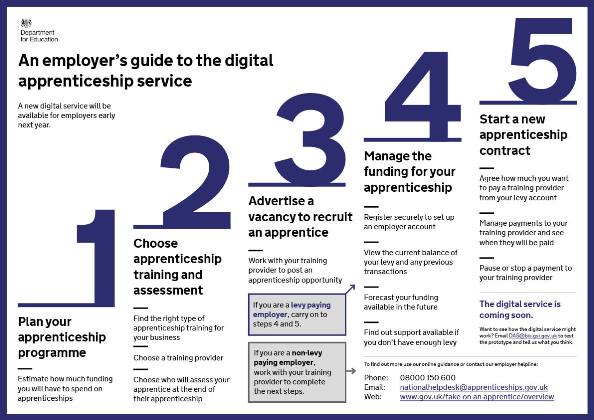 The government expects to spend at least £12.5m on delivering its new Digital Apprenticeship Service, FE Week can reveal.

The budget will cover both costs to the Skills Funding Agency and suppliers of services such as web development and user research, according to the Department for Education.

A DfE spokesperson told FE Week: “The cost of building the DAS is split between internal costs to the SFA and a range of external suppliers.

“In line with Cabinet Office best practice, these external costs include services like hosting or skills from SMEs [small and medium-sized enterprises] that are specialists in web development, user research and design.”

The aim of the DAS is to help employers to take control of delivering apprenticeships, and the service will list the new apprenticeships standards that are available.

According to the SFA, employers will be able to set up an account on the service and access funding for apprenticeship training, as well as choosing the type of apprenticeships they want to run, the number of apprentices they take on, and the appropriate training provider.

Keith Smith, head of the levy implementation, gave key details about the DAS at both FE Week’s Festival of Skills in July and Annual Apprenticeship Conference in March.

The information about the service’s full cost was first spotted by FE Week in an SFA Digital blog from October 25.

The blog said: “The cost of delivering the core DAS including build and operating costs will be less than 0.5 per cent of the value of the levy which will be collected and managed over that period.

“This cost will be met separately by government not from funds raised from the levy.”

FE Week concluded that, with the levy estimated at 2.5bn, this would mean that the expected cost of delivering the DAS was £12.5m.

However, following FE Week’s enquiry to the DfE about the cost of the DAS, the SFA blog was altered to say: “The cost of delivering the core DAS, including build and operating costs, are expected to be less than 0.5 per cent of the value of the levy which will be collected and managed over the parliament.”

It comes after FE Week reported in September last year that the SFA’s ‘FE Choices’ website would be shut down at the end of October after just three-and-a-half years in operation.

The website, which was previously known as the Framework for Excellence, performed one of the DAS’ functions in allowing a comparison of the performance of providers – though this was for the public rather than a service specifically for employers.

An FE Week exclusive six months after the website launched in January 2012 revealed 6,230 people had viewed it.

The figures worked out as a cost to the taxpayer of £375 per visitor and the coverage was picked up by Private Eye, which questioned whether FE Choices “may be one of the most expensively pointless government websites yet”.