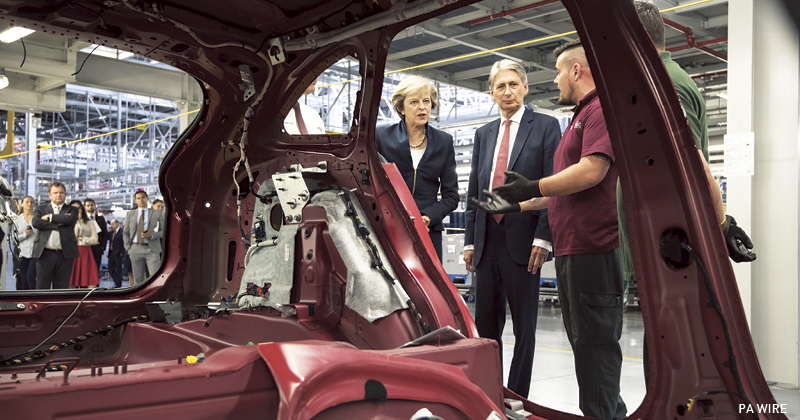 Jaguar Land Rover, the British car manufacturer regularly lauded by ministers for its apprenticeship scheme, has been hit with a shock grade three rating after an Ofsted inspection.

The Indian-owned firm received a ‘requires improvement’ score across the board for its dealership apprenticeship programme, for which it is an employer provider.

The report will raise eyebrows in Westminster, as the government has often praised the firm’s apprenticeship provision.

Prime Minister Theresa May, for example, spoke glowingly of a visit to its Coventry headquarters, during a parliamentary exchange on apprenticeships on September 14.

She said: “We’re committed as a government to ensuring more apprenticeships are being created – that’s giving young people opportunities, like the young people I met when I went to Jaguar Land Rover, to learn a skill, get into a job, get into the workplace, and get on where their talents take them.”

However, it was the apprentices’ performance, as well as poor oversight for subcontractors, that the Ofsted report published on October 17 said had brought Jaguar Land Rover down to earth from its previous rating of ‘good’ overall.

Inspectors found that “too many apprentices complete their portfolios too slowly”, even though “the large majority” completed their programmes successfully.

The report also warned that senior leaders “entrusted the subcontractors with delivering good-quality provision, with insufficient challenge and insufficiently clear specifications of the quality expected”.

Inspectors found that “too many apprentices complete their portfolios too slowly”

Jaguar Land Rover’s disappointment follows another inadequate rating for an employer-provider car manufacturer in late May.

Paul Joyce, Ofsted’s deputy director for FE and skills, warned the government about declining standards at employer providers during a parliamentary committee hearing on October 19, and the issue is likely to arise again in the outgoing Ofsted chief inspector Sir Michael Wilshaw’s final annual inspection, which is due in the coming weeks.

Nevertheless, the Skills Funding Agency has gone ahead with its new employer-provider register, to help encourage more employers to run their own training.

It hasn’t all been bad news for employer-providers though: Siemens was rated ‘outstanding’ by Ofsted in August.

It does not operate as the employer-provider for this programme, however, so it is not therefore subject to Ofsted inspection.

“We are aware of the outcome of the recent inspection of Jaguar Land Rover Holdings and will be working with the company to ensure that robust plans for improvement are in place to ensure apprentices develop the skills they need to build successful careers,” said an SFA spokesperson.

A spokesperson for Jaguar Land Rover told FE Week that the firm was “clearly disappointed” with Ofsted’s findings.

“Our management team had undertaken a review of the programme just prior to Ofsted’s review that recognised improvements were required – as has been referenced in the Ofsted report,” he said.

“We are working hard with our team to ensure that our high success rates for the programme are supported by high-quality reporting and management of the programme metrics.”

Calex UK Ltd was unavailable to comment, despite repeated requests.