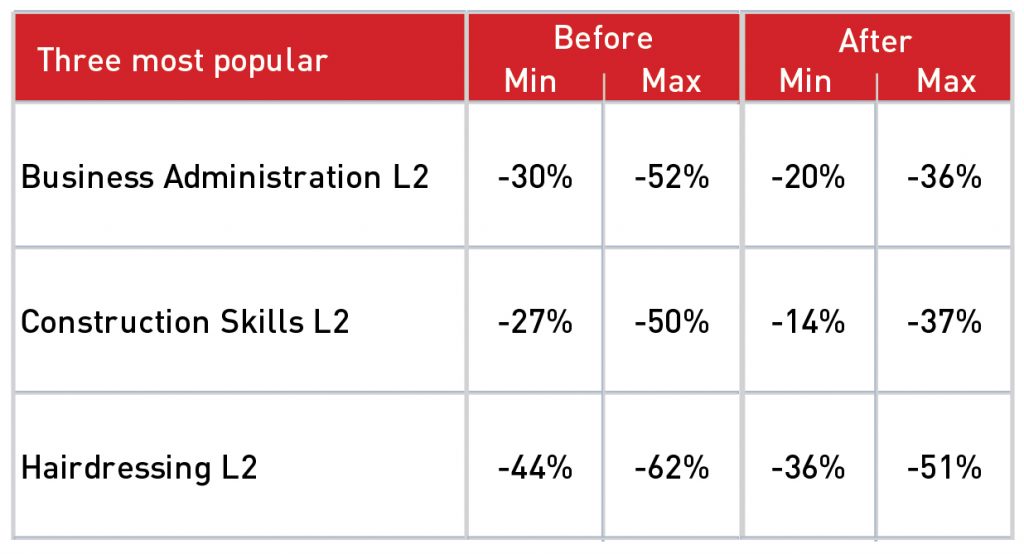 Despite the very public “U-turn” the government made on proposed apprenticeship cuts on Tuesday, funding is still due to be cut from key frameworks by up to 50 per cent, exclusive analysis by FE Week has shown.

In August, this newspaper discovered that cuts proposed by the Department for Education would cause framework funding rates for 16- to 18-year-olds to tumble by more than half, and would disproportionately fall in some of the nation’s most deprived areas.

And following the extreme pressure brought to bear by our #SaveOurApprenticeships campaign, the DfE announced on Tuesday that it would introduce two measures to arrest the decline – by paying an extra 20 per cent on the funding band limit for 16-18 year-olds, and promising £60 million of “additional support in areas of disadvantage”.

However, FE Week has crunched the numbers again (click here to download) and found that while the cuts aren’t quite as steep as before, most frameworks will still feel cuts of 20 per cent or more.

For instance, before the U-turn, we calculated cuts of between 27 and 50 per cent to construction skills at level two. After it, the cuts range from 14 to 37 per cent – figures which could still devastate the sector. In other popular sectors such as hairdressing and engineering, our analysis revealed that at levels two and three respectively, there could still be a maximum drop of 49 to 51 per cent.

David Lammy, the Labour MP who helped FE Week spearhead its campaign, has reacted with fury to our calculations, and has promised to raise the matter in a special parliamentary backbench debate on Tuesday (November 1).

He said: “The government has to explain why – even after this U-turn – its updated funding proposals will still result in cuts of 50 per cent.

“Whilst the government has reinstated the additional support for disadvantaged young people, it has only committed to maintaining this funding for one year and offered no further guarantees.

“I am pleased to have secured a backbench debate on the issue to enable MPs from all sides to make their voices heard.”

The DfE refused to comment directly on FE Week’s figures. Instead, its spokesperson said: “Through the new levy, £2.5 billion will be invested in apprenticeships by 2019-20 – twice what was spent in 2010-11.

“What we need is a simple system that works for all, which is why we have confirmed that the cost an employer will pay for an apprenticeship is the same, regardless of age.

“This week, we confirmed that to help market transition, providers will get an extra 20 per cent for training a young person on a framework. This is on top of the £1,000 paid per 16- to 18-year-old apprentice to both the employer and training provider.”

Mark Dawe, the chief executive of the Association of Employment and Learning Providers, echoed Mr Lammy’s sentiment, saying: “There are still cases where the funding for frameworks is dramatically lower.

“We need to understand these specific cases and demonstrate to the government the concern about the ability to deliver these and the consequences, if there are no further changes.”

Robert Halfon, the apprenticeships and skills minister who will preside over these cuts, confirmed in an interview with FE Week’s editor Nick Linford that neither of the DfE’s new measures would be permanent – and that the extra £60 million would only last for 12 months.

He will answer Mr Lammy’s questions during Tuesday’s debate, while he is also likely to face tough questions on the funding changes surrounding the new apprenticeship levy launching in April at a Commons sub-committee on education, skills and the economy hearing the following day.

At last month’s #SaveOurApprenticeships launch, Mr Halfon conceded that “we need to look at all of those apprenticeship funding figures – and we are”.

Jonathan Slater, the top civil servant at the DfE, also claimed during a recent meeting of the public accounts committee that getting the funding rate right for young people from deprived areas “is one of the most active debates we’ve been working through”.