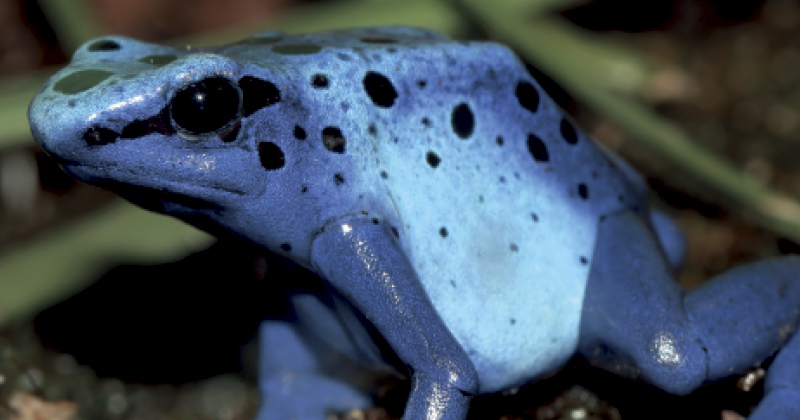 Poison dart frogs are known for their minute size, bright colours and highly toxic skin that can result in a trip to A&E – but one daring lecturer at North Shropshire College is on a mission to breed them. Samantha King reports.

At 2.5cm in length and available in a wide variety of colours, the poison dart frog could be considered the perfect pet – if it weren’t for the fact that it’s one of the most poisonous animals on the planet.

Originating from the rainforests of South America, the tiny creatures range in toxicity, with the larger golden variety harbouring enough poison to kill 10 grown men.

Laura Pugh, an animal care lecturer at the college’s Walford campus, started her unconventional project 12 months ago, overseeing the delicate process from egg, tadpole and froglet, all the way through to fully-fledged frog.

The particular species bred by Ms Pugh is known as the blue poison dart frog. Discovered in 1968, it is also referred to as the poison arrow frog, after rainforest hunters’ practice of rubbing toxins from the frogs’ skin on the end of their arrows.

This isn’t the first time the species has been bred at the college. Three years ago, a donation of two blue poison dart frogs from an ex-student who was joining the marines inspired Ms Pugh and animal technician Simon Metcalfe to attempt to breed the frogs, but they only managed to rear one. Ms Pugh with an adult and baby poison dart frog

She said: “The process takes a few months, whereas a normal, average frog takes about two to four months. They also have to learn to breathe as well on land after they’ve been in the water that whole time.”

The agonising process involves keeping the eggs perpetually moist, monitoring the tadpoles as they develop their front and back legs, and assisting them as they attempt to leave the water and take their very first breath. Ms Pugh has even invested in a special tadpole flake to feed to the youngsters, with a helping hand from students.

“Students have been involved with watching and transferring tadpoles into the water, helping with feeds, and topping up the water when they need to. They’ve also helped in choosing what would best mimic a natural environment,” she said.

Their diet determines their toxicity

Despite the frogs’ poisonous disposition, students, staff and health and safety officials alike need not worry, as it’s their diet that determines their toxicity. In captivity, they are fed on the likes of micro crickets and fruit flies so they remain safe to handle – a milder dinner option than their usual cocktail of fire ants and termites.

Despite their tiny size, the frogs have a life span of up to 15 years in captivity, and Ms Pugh is keen to add more varieties to her collection, saying: “I’d like to breed more,
and I’d like to actually trade in for some different colours of the dart frogs. Maybe even a strawberry poison dart frog, something like that.”

FE Week asked the poison dart frogs for a comment, but they politely declined.