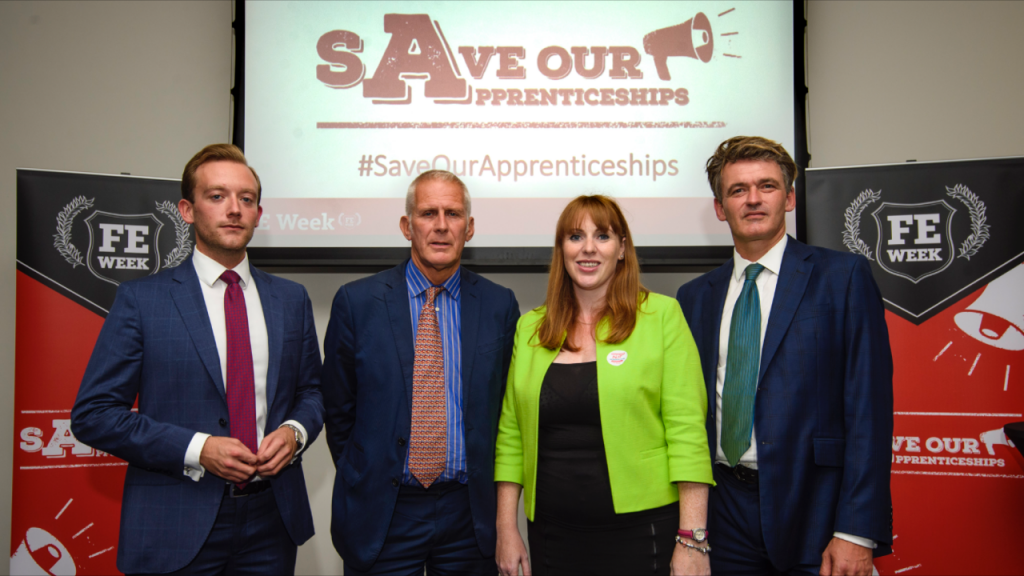 The shadow education secretary Angela Rayner has reaffirmed her support for FE Week’s #SaveOurApprenticeships campaign at a Labour Party Conference rally this evening.

Speaking at the rally in the Pullman Hotel in Liverpool, Rayner described it as a “really important campaign”, and one which is very close to her heart.

The campaign aims to send out a message to the government that cuts of between 30 and 50 per cent to apprenticeships funding, which are planned for 16- to 18-year-olds in some of the most deprived areas of the country, are simply not acceptable.

“I came up through the FE route with a national vocational qualification in care, and let’s face it, it’s a lifeline for learners like me, to do well in our work, and people who maybe failed in their GCSEs but actually have some really good solid vocational skills,” Rayner told FE Week.

She said apprenticeships offered young people a “really good career” in whatever they wanted to do, but said they needed to be “proper quality apprenticeships” and warned that the government would damage the economy if it failed to listen to the campaign.

Our damning findings on the impact of apprenticeship funding reform plans have already provoked shadow skills minister Gordon Marsden and more than 50 other MPs led by Tottenham’s David Lammy to write a letter to the government begging for a change of heart.

Marsden told the event tonight that the government needed to be “very clear” that they were being “watched very carefully”, and warned they had form when it came to “disappointing 16 to 18-year-olds over apprenticeships”.

Senior politicians from across the political divide, including skills minister Robert Halfon, who defended the cuts, spoke at the launch of the campaign earlier this month.

Mr Lammy insisted during his campaign launch speech that “it’s an absolute scandal for the PM to say she doesn’t recognise the figures. It’s her funding agency, they’re her figures.”

However, he insisted: “We will force a U-turn.”

Mr Marsden warned that the cuts were “an elephant trap in his [Mr Halfon’s] in-tray”.

Education secretary Justine Greening was also asked that morning about how proposed cuts might affect social mobility during an education select committee hearing.