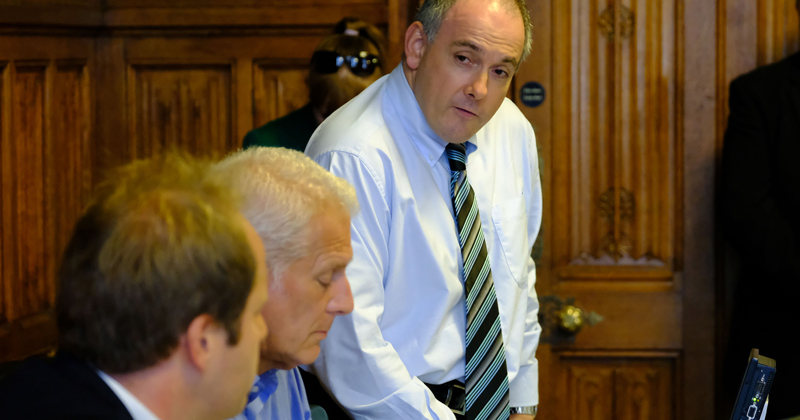 FE Week’s first ever campaign garnered serious attention in Parliament yesterday, with the Prime Minister, education secretary and minister for apprenticeships all fielding questions on the proposed funding cuts to 16-18 apprenticeships.

The #SaveOurApprenticeships campaign opposes damaging cuts to apprenticeship funding exposed by FE Week over the summer.

As the launch got underway, the #SaveOurApprenticeships hashtag began trending on Twitter.

Earlier in the day, Education Secretary Justine Greening dodged the Education Committee’s question about how the proposed cuts might affect social mobility, to focus their attention instead on the ongoing consultation into the changes.

Second to come under scrutiny was Theresa May, who revealed her unpreparedness during PMQs when she failed to “recognise” the funding cuts “situation” described by Richard Burden, Labour MP for Birmingham Northfield.

Halfon’s speech, the first in his new role at an FE-related event, is reproduced in full below. A full report on the campaign launch will be available in the next edition of FE Week, in which the minister for apprenticeships will also be writing an exclusive column. The success of FE Week’s campaigning efforts did not go unnoticed:

In 72 hours, @FEWeek filled a room in Parl’t, got the SoS questioned in select committee & a question in PMQs on #SaveOurApprenticeships

The packed chamber offered standing room only, as colleges, training providers and other sector bodies sent representatives to the campaign launch to demand that the government’s plans be changed. The #SaveOurApprenticeships campaign is based on FE Week’s exclusive analysis of government plans, which shows that, despite a £1000 provider incentive, the funding to deliver apprenticeship training and assessment to young people will be slashed from 1 May next year.

The unedited text of Halfon’s speech is reproduced in full, below:

Halfon: “It is wonderful to be here today, not just because it is one of the few rooms in the House of Commons that has air conditioning but because there are also so many providers and other people connected with apprenticeships.

“I’m really pleased to be here on behalf of FE Week, which is an incredibly important publication. I went on my honeymoon in August and I was literally reading FE Week past papers on the mountains in Brazil, and the way I think of Nick and his incredible team is that they make the social media life of a new minister intolerable but they make complacency impossible, and that is a compliment.

“I also genuinely want to thank Gordon and David Lammy because they have been doing their job. As a new minister there is no one I would like to shadow more than someone like Gordon Marsden who really knows the subject and of course David Lammy is known for being a passionate person who cares about the poor.

“I firstly want to lay out my priorities before getting onto the controversial subject.

“The second part of it, and this is where I understand why David is making the point he is making as well as Gordon and other MPs, to me why I am doing this is partly about economic productivity yes, but also because I believe in social justice and I believe we can provide the people who are on the lowest incomes but also for the people as the prime minster describes, just get by, and provide that opportunity through apprenticeships and skills to literally transform peoples lives and change our country. I see apprenticeships as a fundamental part of social mobility and reform and that is why I agreed to do this job and why I am very pleased to be doing it with all the social media responsibilities of social media put aside. Robert Halfon, MP, speaking to #SaveOurApprenticeships campaigners in the Commons

“The first thing I need to set on the table to you is that there is going to be no delay to the apprenticeship levy. Where we can work together from both sides is looking at the consultation which we have been doing very carefully over the summer, we have nearly 1,000 responses and huge engagement before the official consultation and since by myself and other officials as well as organisations on a regular basis. Having said that, and I know that will not please everyone although some do agree.

“I need to discuss the big issue of frameworks. First thing we also have to mention is the number of money spent on apprenticeships which was always going to be down to roughly two and a half billion as you know. The second thing is of course that Nick and the MPs have highlighted areas of concern, and we need to be challenged on this, but there are also frameworks going up. Separate to that STEM subjects are going up substantially so not everything is going down.

“The next thing I would say is that what we have to understand is that we are in a new world and the new world is going to happen when the apprenticeship levy comes in.

“The way things are with behaviour of both businesses and employers because they are designing the new standards this is going to change. When we look at what is happening to funding we need to look at that, but let us remember as I said, not all frameworks are going up and down, in order to encourage employers to employ 16 to 18 year old apprenticeships and they get a significant contribution of £1,000 to them and £1,000 to the provider and on top of that if it is a smaller company with less than 50 people they don’t pay any costs at all.

“In terms of the issue that David rightly raises, I would not be in this job if I thought that the most disadvantaged in our society would be hurt, what is the point of me doing it? It is worth remembering also that again the contribution significantly lessens from the employer if they are people with a local authority care plan or from a care home and I am looking at that issue as I speak but also it is not always the case that the most vulnerable are protected, even that system has flaws.

“If you lived in wealthy street but don’t happen to have any income you will not necessarily get the uplift you need.

“The final thing I would say to you is that as I say, this is a consultation, I am not annoyed by what Gordon and David are doing, I actually welcome it because it helps us with our thinking, if I was them I would be doing exactly the same thing.

“I hope we become and apprentice nation and I hope the levy will be the change maker we think it will be.”

Nick Linford: “One thing I would say in terms of the consultation is do you have a response on the construction sector from CITB – they have come out publicly and said the new world isn’t ready for them, they are still designing standards that are 2 years away, if we cut funding by 30 per cent, those employers won’t be there in two years when these new standards develop. Do you have a response to that sector in particular and how ready they are for the ‘new world’?”

Halfon: “It will be no surprise to you that it is not just the CITB who are campaigning for construction, both Gordon and David have been doing it. At the end of the day when the standards come the standards are going to have more money spent on them than others in the current system, the issue is how you transition from frameworks to standards and the speed in which we do this.”