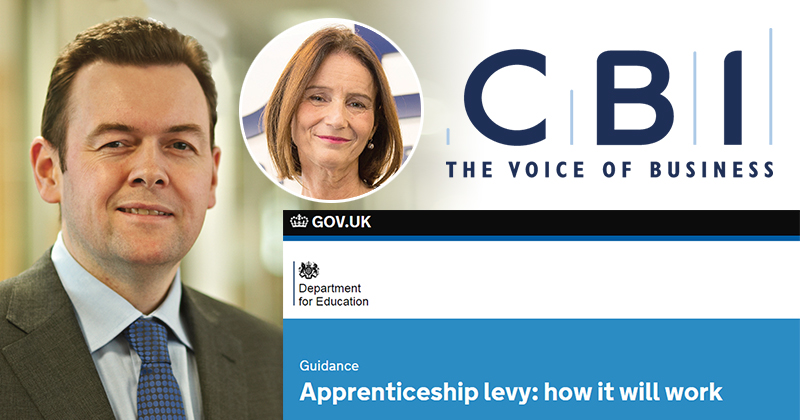 The apprenticeship levy is a “project timeline in trouble” the Confederation of British Industry has said, as the industry body reiterates its call for the levy to be delayed.

In an exclusive article for FE Week, Neil Carberry, the CBI’s director for employment and skills, said the only way to create a system that delivers “three million opportunities – not just three million starts” was by delaying its introduction.

Mr Carberry said: “Enough people within government know what a project timeline in trouble looks like – and the levy system is one of those.

“On the digital service, cross-border issues with Wales, Scotland and Northern Ireland and many more concerns.

“In truth, it is highly unlikely that the structures and rules necessary to make the system work on day one can be delivered effectively on the current timelines,” he said.

His remarks come after the Department for Education published its hotly-anticipated apprenticeship levy update, first reported by FE Week this morning, which included details of the funding arrangements for small employers, as well as a consultation for the new register of apprenticeship training providers.

While this new information was “something to welcome” Mr Carberry said “you don’t have to go far into the document to realise businesses will still be concerned at the direction of travel”.

A levy system that helps fill skills gaps and improve outcomes for learners should put “quality and system design first, not fiscal and political targets”, he said.

He added: “Our view is that levy design is coming to these vital economic and social goals too late – the system we have is designed to work for Whitehall – but won’t work in Walsall.”

Mr Carberry said the CBI was concerned over the lack of flexibility in the system.

He said: “We need a system – like so many other levies around the world – that is flexible enough to fund what firms and learners need and make those who don’t train pay the costs of those that do.”

He also voiced fears over the lack of transferability of the new apprenticeship standards in development.

If the courses “have to be high quality and add to people’s employability”, he asked, “why are we seeing qualifications actively purged from trailblazers?”

“Why will the employer-led Institute for Apprenticeships have no voice over the set-up of the system, only its operation?”

The only way to deliver the “right approach that rewards businesses who do the right thing, high-quality business-led standards, and a system that works on launch day” is by delaying its introduction, he concluded.

Mr Carberry’s remarks build on comments made by CBI director general Carolyn Fairbairn in response to today’s update, which she said “shows some progress”.

But she warned it “risks turning the clock back on recent progress through poor design and rushed timescales”.

“Without a radical rethink it could damage not raise training quality,” she added.