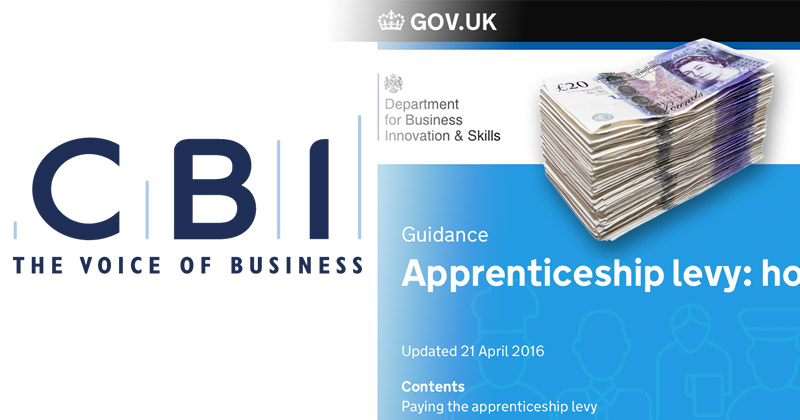 The apprenticeship levy launch date should be delayed by the new skills minister, the Confederation of British Industry (CBI) has insisted.

Harlow MP Robert Halfon was confirmed as Nick Boles’ successor as skills minister yesterday — a few hours after on the CBI unveiled the results of a survey with nearly 500 companies showing widespread concern about the rushed design of the levy.

When subsequently asked by FE Week asked if it wanted Mr Halfon to delay beyond the planned April next year launch date, a spokesperson said “yes”.

That went a step further than Carolyn Fairbairn, director general of the confederation, was prepared to go in her interview with editor Nick Linford two months ago — when she would only say that “delay is certainly an option”.

He said: “The priority is getting the apprenticeship levy fit-for-purpose, as it will need a genuine change of direction if it is to work for apprentices, business and the economy.

“Nine months out from the planned start date businesses still lack vital information — the new administration should take the time to get this right.”

He added: “Business remains committed to working with them to achieve this – but time is running out.”

It comes after FE Week revealed yesterday that the Department for Education (DfE) and Mr Halfon are expected to unveil a delayed document providing more information on how apprenticeships will be funded post-levy in the next few days.

Mr Hardie warned it currently appeared the levy system would “work in Whitehall but it won’t work in Walsall, or any other part of the UK where business is training and developing people”.

“While the ambition is positive, the current design does not recognise the breadth of great training currently being delivered and runs the risk of unintended consequences, including fewer apprenticeship opportunities,” he said.

The survey by CBI and Pearson indicated that almost half of all medium-sized businesses (MSBs) thought they would have to absorb the levy as an additional tax – and make no changes to their training arrangements.

It also showed that two in three thought they would not increase apprenticeship numbers from April.

A consultation document on the levy unveiled in August said the government wanted it “to be calculated on the basis of employee earnings and for employers to pay through their PAYE return”.

Mr Osborne subsequently confirmed that larger employers would have to pay 0.5 per cent of their pay roll costs towards the charge — offset by a £15,000 allowance meaning that most businesses will not have to contribute.

But there is still widespread concern about how the revised funding system will work for non-levy paying smaller firms.

When invited to respond to the CBI call for a delay, a government spokesperson would only say: “Our focus is on ensuring the levy works for businesses of all sizes as they adapt and seize opportunities in the coming months.

“We are continuing to work with employers to design the apprenticeship levy around their needs.”