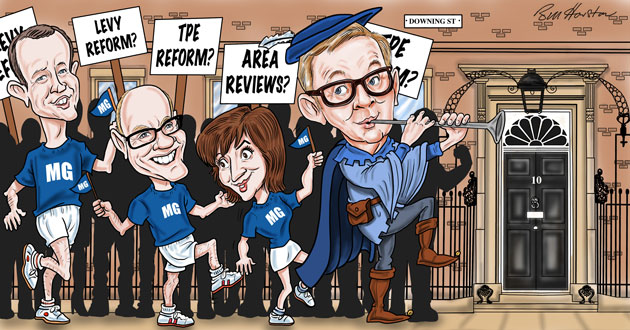 Mr Gove, backed by skills minister Nick Boles who also ran his leadership campaign, has been knocked out of the contest to become the next Tory leader after persuading just 46 MPs to support his bid.

That leaves home secretary Theresa May, who secured 199 votes, and Andrea Leadsom, who won 84, to battle for the top job.

It is now down to Conservative party members to vote for who they want to become the next leader.

Mr Gibb tweeted that he is “very sorry” Mr Gove will not be the next prime minister, adding: “Having worked for him I know he would have been a great and reforming PM.”

He has now backed Ms May and praised her “judgment, experience and character to unite the party and give leadership to our country”.

Ms Morgan also later tweeted she is “disappointed” with the result, but said Ms May is now the “one clear choice to be the country’s PM”.

Ms May is a known supporter of grammar schools and her leadership campaign is being headed by Nick Timothy, who has taken an unpaid sabbatical from his role as director of New Schools Network.

Ms Leadsom, the south Northamptonshire MP, is a former city minister and banker, who campaigned for the UK to leave the EU.