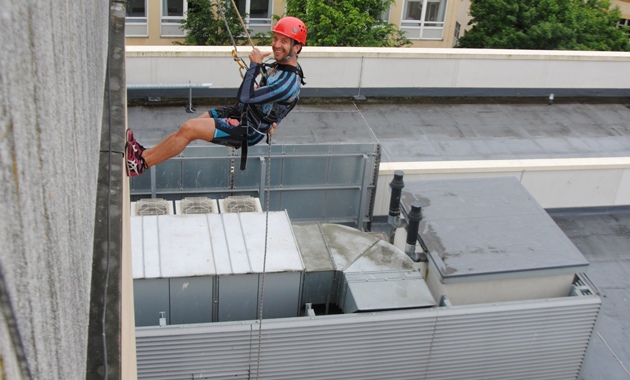 Charity superheroes have abseiled down Bath College’s tallest building to support sick children in hospital — and their families.

Thirteen students and staff braved the 24m abseil, climbing over the edge of the college’s Macaulay building to help raise money for the children’s charity Time is Precious.

Performing arts student Aaron Hooper, 19, admitted his whole life flashed before his eyes as he looked down from the roof top. Overseas Spanish student Antonio Perlado Ortega, 36, who studies at the college’s English Language School, braces himself for the abseil

“I knew it would be scary but I was shaking like mad when I was kneeling over the edge,” he said.

“I’m only going to be at the college once. It’s good to get involved with as much as you can so you can look back and be proud of it all.”

The event, which saw some students dress up in costumes including minion outfits and Spiderman, raised more than £600 for Time is Precious.

Students have now raised £1,300 overall for the charity, which provides hospitals with new equipment and facilities for young patients, after it was chosen as the student union charity of the year.