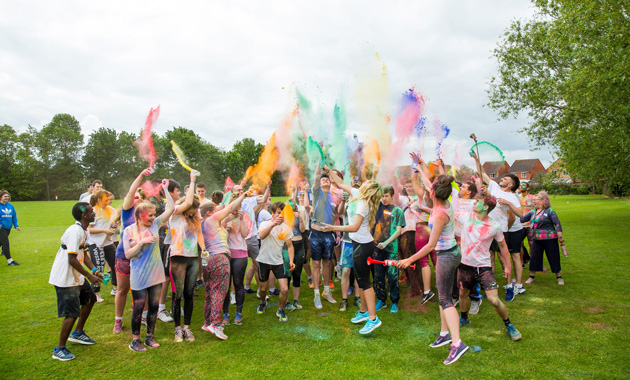 Bridgwater College students and staff have taken part in their first ever ‘Colour-ful Run’ to raise money for two charities in memory of a 30-year-old teacher who died last year.

The event was put on in tribute to Luke Buckingham, the college’s football coach, who lost his battle with Leukaemia last October, and raised more than £400 for Anthony Nolan and Delete Blood Cancer.

More than 80 runners began the afternoon in a white T-shirt, before getting covered from head to toe in a rainbow of colours as they made their way around the course.

Participants could choose to do either a 3km or 5km course, and could walk, skip, jog or run for their chosen distance.

Sammy Kemmish, who is both the college’s sports massage intern, and one of the organisers of the ‘Colour-ful Run’ said: “I am absolutely buzzing at the success of our event.

“The atmosphere has been amazing and exactly what I had envisaged, with both staff and students coming together to raise money for two charities very close to our hearts.”