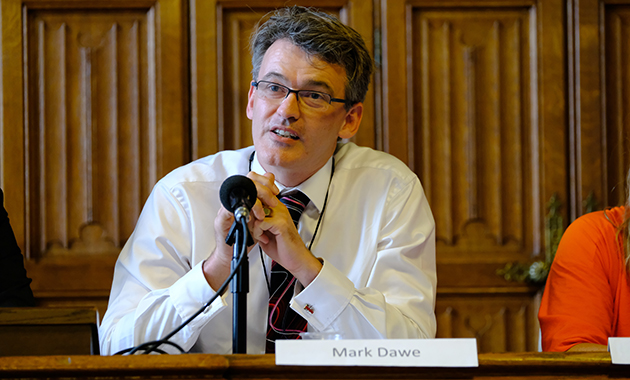 Mark Dawe (pictured) may only be weeks into his new job, but he is already breaking the mould.

The former college principal and awarding organisation chief has become the first boss of the Association of Employment and Learning Providers (AELP) to openly criticise the scale of subcontracting.

Mr Dawe conceded that subcontracting was a “complex issue” and often takes place “for good reasons”.

But he was keen to highlight that “the sheer growth of it over the last 10 years has also happened for reasons that are harder to justify”.

“We know ministers are concerned and we think they know what needs to be done,” he added.

“The new levy system will still require funding allocations within a finite programme budget, and it is important much more of those allocations go to providers who can directly deliver apprenticeships.”

This is the first time AELP has come out firmly against the volume of subcontracting, and the move will be viewed as a major change in direction under Mr Dawe, who took over from Stewart Segal as chief executive in March.

His remarks follow a string of negative headlines generated recently by the controversial practice.

We reported last month that around 300 non-compliant colleges and training providers had been threatened with subcontracting bans after failing to follow disclosure rules.

The SFA also announced in April that it was reviewing the use of brokers in fixing short-term tactical subcontracting deals – after an FE Week investigation found they were raking in up to five per cent commission fees on seven figure contracts.

The Department for Business Innovation and Skills (BIS) demanded an end to ‘tactical’ subcontracting in their 2015/16 grant letter to the SFA.

And the National Audit Office confirmed in February it was investigating management fees – after it emerged that lead contractors were withholding up to 40 per cent of government funding allocations.

The SFA’s director Keith Smith, who is currently on secondment to the BIS, overseeing levy implementation before it goes live next April, warned delegates to plan for a future without subcontracting at the Association of Colleges conference last November.

This was because levy reforms will mean colleges no longer have a funding allocation for apprenticeships. Instead, employers will be able to approach subcontractors to work directly with them, potentially leaving colleges in the cold.

The AELP’s freedom of information response analysis also indicated that 40 per cent (62,240 of 157,290) of all apprenticeship starts contracted through FE colleges were actually delivered by ITPs as subcontractors.

Teresa Frith, senior skills policy manager for the Association of Colleges, was shown the figures but still insisted that “subcontracting has benefits for both colleges and independent training providers because it minimises the amount of bureaucracy created by the funding system”.

FE Week asked the SFA why it was still allowing up to £1bn a year of subcontracting to take place per year, in view of AELP’s findings.

A spokesperson said: “Our funding rules state that lead providers should only use subcontractors who they determine are of a high quality and low risk.”

Editorial: I agree with Mark

The new chief executive at the Association of Employment and Learning Providers (AELP), Mark Dawe, is keen to portray his members as the apprenticeship ‘experts’ that colleges go to for help.

The scale of college subcontracting should come as no surprise to the Skills Minister and readers of FE Week, which has regularly reported on the issue since our first edition
in 2011.

However, what is as welcome as it is surprising, is Mr Dawe’s decision to criticise the continued growth in subcontracting.

Readers of my previous editorials on subcontracting will be familiar with my concern over top-slicing arrangements.

But what’s surprising is that the membership body for so many of the subcontractors has criticised the growth in their use.

Many subcontractors I speak to are happiest out of the spotlight of a direct Skills Funding Agency (SFA) contract.

It’s an important intervention, although with increasingly diminished resources at the SFA it seems unlikely they will rush to issue new direct contracts.

It also leaves the Association of Colleges exposed and alone in failing to face up to the truth.

There continues to be too much subcontracting, and the SFA should step in to reverse the trend.

Will the apprenticeship levy be a subcontracting game-changer alone?

That, like so much of the levy plans, remains unclear, untested and uncertain.