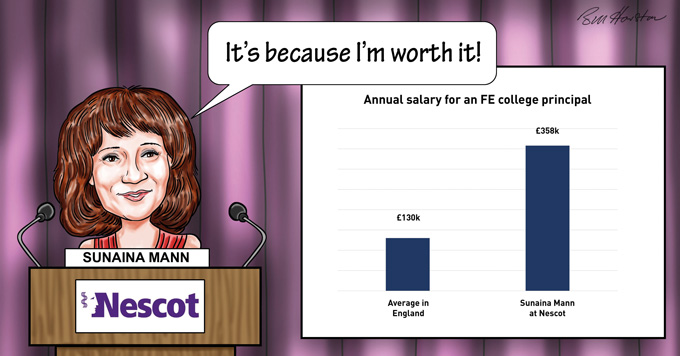 The college with the best-paid principal in the country initially understated her salary to the Skills Funding Agency (SFA) by £27,000 — before accurate figures revealed that she earns £358,000 a year.

The salary of Sunaina Mann, principal and chief executive officer of the North East Surrey College of Technology (Nescot) Group, was initially listed as £331,000 in 2014/15, according to data made available by the SFA in March.

This figure — which the college has confirmed to FE Week is still being paid — makes Ms Mann the highest-paid principal in the SFA’s college accounts.

Her salary is almost three times the average wage — around £130,000 — paid to college leaders over the same period.

A spokesperson for Nescot confirmed that there had been no recent changes to Ms Mann’s role, and claimed that the initial, lower figure had come from “the college’s draft financial statements at the time”.

She said: “In the first version of the college accounts data, released in March 2016, the salary of the principal and chief executive was shown as £331,000, which was the figure included in the college’s draft financial statements at the time.”

Nescot is currently in its third year of involvement with the Saudi Arabian Colleges of Excellence programme.

In September 2013, Nescot set up a female college in Jeddah as part of the scheme, which promotes technical and vocational education in the region.

FE Week asked Nescot about the programme when the original salary figures were released in March.

At the time, a spokesperson for Nescot said she was paid more.

“Sunaina Mann is the principal and CEO of the Nescot Group, which includes Nescot and the Jeddah College of Excellence. Her salary in 2014/5 was £363,000,” she said.

Clarifying the situation this week, the spokesperson confirmed that the £363,000 “referred to in March 2016 included £5,000 of benefits in kind, as confirmed in the published audited financial statements. These benefits relate to private medical insurance”.

Natalie Bennett, the leader of the Green party, meanwhile complained about college principals’ salaries at a parliamentary event on Wednesday (May 11).

She said: “There’re a few people in FE who really haven’t got much to worry about.

“Some college heads are on more than £200,000 a year. I’d love to know how you could possibly think about justifying that.