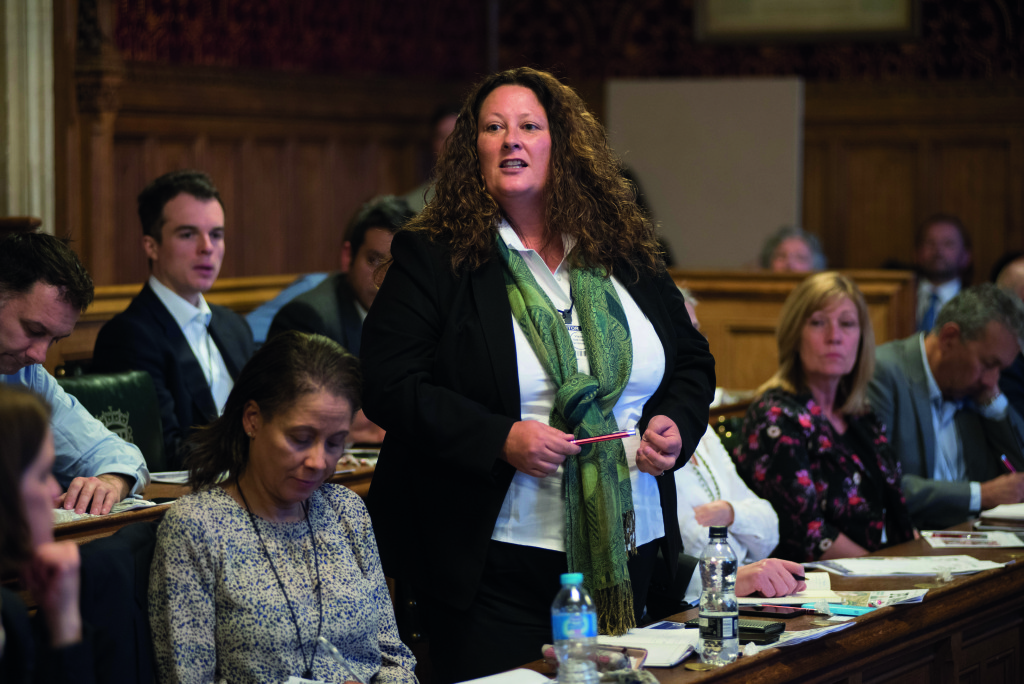 Charities are caught in a “conflict of legislation” over the government’s apprenticeship levy, a senior sector figure has warned.

The requirement for charities to ensure their funds are spent directly on their missions will put them in conflict with the levy, according to Beth Brook (pictured above), the chief executive of Fair Train, the group training association for the voluntary and community sector.

Speaking at FE Week’s parliamentary debate on the levy in the Palace of Westminster on Tuesday (May 3) , she said: “There seems to be a conflict of legislation — charities and charity trustees need to make sure charity funding is spent on beneficiaries, and now we have a tax that is coming in that means that charities then need to be spending their money on something else.”

The concerns raised by Ms Brook at the debate echoed points raised by the Charity Finance Group (CFG), a third sector body with over one thousand members, in a letter sent to Skills Minister Nick Boles on December 1, 2015.

Caron Bradshaw, the group’s chair wrote: “Redistribution outside of the charity sector of apprenticeship levy funding could call into question whether money given for public benefit should be allowed to leave the sector in order to subsidise private sector employers and support private benefit.”

Mr Boles subsequently “accepted that there were difficulties around volunteering” in a meeting with the CFG in March this year, but “could not immediately offer a solution to this challenge”, according to CFG minutes.

The meeting covered a number of issues, including the risk of the levy incentivising charities to employ apprentices in place of volunteers — a point that Ms Brook also raised in Westminster on Tuesday (May 3).

Three apprenticeship frameworks that had been developed specifically for the voluntary and community sector, covering fundraising, campaigning, and volunteer management, had also fallen off the agenda, she told legislators.

She said: “At the moment there’s no apprenticeship specifically or the voluntary and community sector. “We’ve got an issue there with supply and demand — we are expecting these organisations to pay the levy but there’s nothing for them to buy.”

Furthermore, she said, “neither civil servants nor ministers are referring to the voluntary and community sector in guidance”, while messages have been “conflicting”.

She claimed that while the Department for Business, Innovation and Skills (BIS) was pushing charities to pay the levy, Rob Wilson, minister for civil society, had been “castigating” them for being inefficient, and urging them to spend less.

“Despite raising these issues with both politicians and civil servants, no one within government has even acknowledged them, let alone done anything to engage with us to address them,” she told FE Week after the event.

“I am not at all confident that the issues will be addressed in advance of the introduction of the levy next year.”

Following the debate, shadow skills minister Gordon Marsden wrote to Mr Boles, asking “what discussions he has had with the Cabinet Office on the liability of charities and voluntary organisations to pay the apprenticeship levy”.