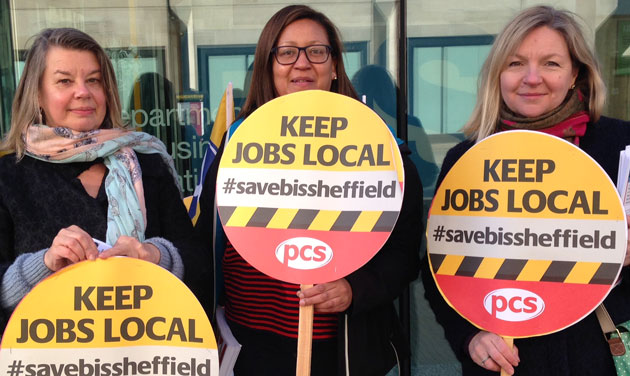 The Public and Commercial Services Union (PCS) is balloting members over strike action to fight closure plans for the Department for Business, Innovation and Skills’ Sheffield office — which it is feared will cause an “FE brain drain”.

The ballot was launched today (April 27), on the same morning that PCS representatives have been staging a protest against the closure plans outside of BIS’s Victoria Street office in London, with the results set to be announced on May 10.

Members are being asked to vote on whether or not they would like to go on strike.

Lois Austin (pictured above right this morning), the PCS full-time official for BIS covering the Sheffield office, told FE Week outside the London BIS office at 8am: “We are balloting because we are completely opposed to the closure of the BIS Sheffield office and the loss of many civil servants who have a great deal of experience of FE.

“The complete failure of BIS to provide a business case and proof of any savings this would lead to is a further major bone of contention.

“It is why we are urging our members to vote in favour of strike action.”

Ms Austin previously told FE Week on March 3 that widespread opposition to the plans to centralise the department’s policy-making in London had forced BIS to delay its consultation by two months.

She said: “They told us back when all this was first announced that the consultation over the closure of the Sheffield office should be completed by the start of March.

“But we’ve now been told that it will be May 2, which shows how shaken up they are by the scale of opposition to this.

“But we asked Permanent Secretary [for BIS] Martin Donnelly for evidence of the analysis they have done to prove this and no one from his team has been able to provide this.”

But it added that additional London salary costs could run to £1.6m per annum — meaning the controversial plan could actually cost £100,000.

A former senior employee at BIS previously warned the planned closure would amount to an “FE brain drain” — as civil servants working in Sheffield “have a huge amount of sector expertise and it looks like everyone will lose their jobs”.

The source claimed BIS had not offered sufficient resettlement packages to make moving to London a viable possibility for many Sheffield staff, and failed to take into account the number of part-time female staff, who would find moving south near impossible.

BIS confirmed that it was aware of the PCS ballot.

A spokesperson added: “We have a responsibility to the taxpayer to ensure as much of the department’s funding as possible is focused on front line services.

“We have deliberately set ourselves challenging savings targets consistent with the spending review and we will continue to explore options in detail before making decisions.”