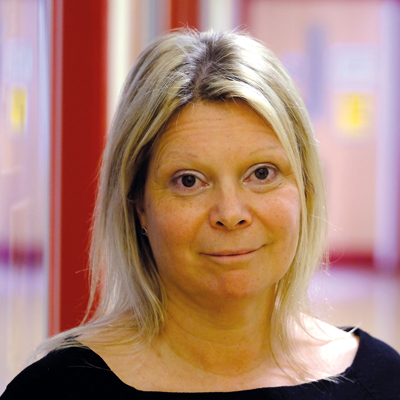 Despite being principal of Orchard Hill College for 21 years, Dr Caroline Allen does not have an office of her own — she is out and about too often.

“It would be such a waste of a room,” she says.

“I’m never in one place. My colleagues always joke that they need to put a tracker on me and see where I go.”

Orchard Hill, a specialist college for students with learning difficulties, is spread across five different sites in London, and will take on a sixth in Hillingdon in September.

She believes that maintaining strong links between these different institutions and their communities is vital — and she is encouraging more collaboration with local employers, mayors, health teams and housing associations.

“Wherever possible we try really hard to build strong relationships and partnerships with our local communities, and one of my key messages that I’m trying to get out at the minute is ‘we’re here with you’,” she says.

Allen was born on Christmas day 1963 in Guildford, not far from Orchard Hill’s main site, where we meet.

A lot of vocational, professional learning is playing to people’s talent or creativity

She was the youngest of three girls and her sisters Cheryl and Wendy gave their names to the family home ‘Cherwen’. “I was a bit of an afterthought,” she laughs.

Her father, Graham, worked for a merchant bank and her mother, Maureen, was a dressmaker. They still live in the same home and Allen describes her childhood as “really lovely”.

“When I was little I used to have parties in the summer, because of course you couldn’t really have a party at Christmas,” Allen says.

“My mum used to say it’s an official birthday — like the Queen.”

Allen’s education began at local primary school The Raleigh School in Horsley, and then Tormead, a selective independent girls’ school in Guildford.

The school gave her “a lot of understanding about how the world works”.

She remembers her headteacher, Ms Shackleton: “She was about my height, she was tiny, but she had a big personality.

“She would say every day, every assembly: ‘Hold your heads up high girls.’ ”

“When I’m walking through the college now, I might have all these things going on in my head, but I think of that. If I went round as a nervous wreck everyone else would be too — it catches.”

She studied music, English and French at A-level, and as the only person in the year doing music she was taught one-to-one.

She sang and played piano and even managed full marks in her theory exam — despite her teacher “tearing his hair out” while she was learning.

She then went on to attend the Central School of Speech and Drama at Swiss Cottage, and did her teaching degree there in speech and drama.

“I think all teachers should get drama trained, it’s really good for interaction and communicating in different ways. A lot of the staff here are into some form of creative hobby.”

She says this really helps in working with young people with special needs.

“A lot of vocational, professional learning is playing to people’s talent or creativity and I think that we need to not lose that as we go forward,” she adds.

Allen’s next step was a big one — she wanted to see the world, so bought a one way ticket to Hong Kong.

She stayed there for two years and during this time gained her first experience of teaching.

“I taught everybody from age two to age 64. I taught English as a foreign language, business English, kindergarten, and I taught people with special needs as well,” she says.

“One of the people I worked with was quite severely autistic, he was quite challenging in his behaviour so I was working a lot on communication with him — I enjoyed that.”

By the time she returned to the UK, Allen had decided that special needs was the field for her.

“I found the job here as a teacher and immediately knew this is it, that’s the one,” she says.

It is 29 years since she first joined Orchard Hill and she jokes: “It’s like the Bermuda Triangle here – you’ll never escape.”

Allen now lives in Cheam, Sutton, with her son Kieran, who is 18.

He is studying Visual Effects and Games Design at North East Surrey College of Technology (Nescot).

They are close and recently travelled to Paris for an Easter holiday together.

Kieran is volunteering with the Orchard Hill digital learning department once a week, helping with a project that Allen is particularly proud of because it has been partly created by the students.

They have worked on a digital portfolio tool that profiles a learner’s journey electronically, and Allen says it has been really important in helping them to convey their successes to others.

The college also offers traineeships and Allen has cultivated a partnership with Guy’s and St Thomas’ hospitals in London to deliver these, which has presented a great range of learning opportunities for Orchard Hill learners.

“With the two hospitals and also the community teams, there is virtually every job in the world in that little area,” she says.

“Within the hospitals, they’ve got Costa Coffee and that sort of thing, so it’s not just the hospital jobs there are other franchises as well.”

Allen says that some of the students at Orchard Hill find communication very difficult, but she adds that with a bit of patience opportunities can be found for everyone.

“It’s very challenging, but once you get through all of that and teach them how to communicate well, they can find their niche – the thing that they’re really good at.

“I always say we’ve all got a slot, and if you’re in the wrong slot that’s when things can go wrong. It takes a bit of trial and error.”

She gives that example of one student with particularly challenging behaviour who eventually found a job in a training centre for boxing. “They love him,” she says with a grin.

Outside of Orchard Hill, Allen sits on the Education Funding Agency Advisory Board and the London Young People Education and Skills Board. She is also a member of the Association of Colleges London Regional Committee and a governor at Croydon College and St Dominic’s School, in Surrey.

These additional roles help her to maintain an understanding of the sector as a whole and how its different parts are connected.

She says that seeing things from a range of perspectives is important in helping students with special needs to progress through education and into employment.

“In education, people are under pressure to show results and attainment, and that doesn’t always help with inclusion. It’s the value added that I think we should be focusing more on, rather than very simplistic qualification outcomes.

“Our students should be appreciated for what they can offer, as opposed to being thought of as recipients of care.”

She adds that communicating clearly and building strong connections with the local community is part of driving this forward.

“It’s about having a lot of really enthusiastic support both ways and trying to work together so that our students can get good outcomes from those relationships,” she says.

“You always learn from everybody else — it might be a problem fitting it all in my diary, but I think it is a good way of working.”

I do Qi Gung and Tai Chi. I’ve been doing that for about 30 years and I reckon it’s the only way I can survive. I also do swimming and golf. I go walking with my son in National Trust places and we like that because he is a brilliant creative storyteller and he makes up stories as we go. We do a lot of travelling

I don’t like people being rude. I think it’s unnecessary

I wanted to be a teacher. My drama teacher when I was little, probably about nine or 10, was just fabulous. Her name was Felicity Blackstone. She really helped me and talked to me as an equal. She gave me a love of Shakespeare too. She inspired me

1982 – Began studies for a B.Ed (Hons) degree in Speech, Drama & English at Central School of Speech and Drama

1985 – Completed an MBA at University of Keele

1995 – Made principal of Orchard Hill College