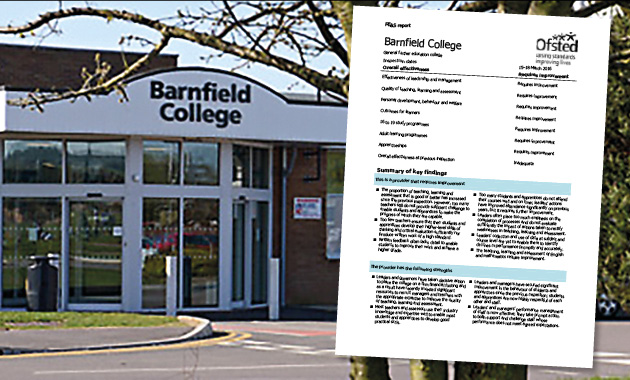 The principal of Barnfield College has vowed it will be ‘outstanding’ within two years — after its Ofsted rating improved one grade from its previous ‘inadequate’ report.

Tim Eyton-Jones described the new report out this month as fair and accurate.

But he told FE Week the grade three across-the-board verdict would be treated as a springboard for further improvements.

“When Ofsted come again — if they come in two years’ time our target is for them to see an outstanding college,” he said.

It comes a little over two years after the college received a notice of concern from the Skills Funding Agency (SFA) over its finances, and 17 months after Ofsted branded it inadequate across the board with no key strengths.

The latest Ofsted report praised the leadership team for “decisive action” taken to turn around its fortunes, but recognised there was still work to be done.

It said college leaders had “developed a detailed development plan that defines precisely the expectations for all staff to provide high-quality education provision and improve outcomes for all students and apprentices”.

“They have secured financial stability and placed the college on a firm footing from which to improve outcomes for all students and apprentices,” the report added.

It recognised that the college had invested “significantly in the recruitment of experienced managers and teachers”.

However, as many of these were recent appointments, inspectors found that “planned actions to improve teachers’ and assessors practice have yet to ensure that students and apprentices make the swift progress of which they are capable”.

While it was found that “the proportion of teaching, learning and assessment that is good or better has increased since the previous inspection”, these were among key areas identified as needing improvement, along with maths and English provision.

The Ofsted verdict comes six months after the FE Commissioner, Dr David Collins, ended his involvement at Barnfield, after his adviser concluded the college had addressed all Dr Collins’ recommendations.

Mr Eyton-Jones told FE Week that he’d had to make “some really tough decisions” following his appointment in February 2015, with a key focus on improving the college’s finances.

“It’s essential that colleges have a sound financial basis to work from, and I am so proud of colleagues that have worked tirelessly to ensure that,” he said.

“I expect our improvements to accelerate, because clearly we are not happy with requires improvement.

“What’s really good about this report is that it clearly picks up the areas that we have got to work on still further and that’s something we are all focused on.”

The college was rated outstanding by Ofsted in 2007, but fell to satisfactory (grade three overall) in 2012.

The SFA declined to comment on Barnfield’s latest Ofsted report.