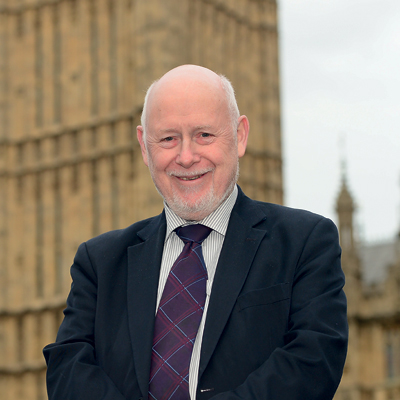 With his softly-spoken and self-effacing manner, Kelvin Hopkins MP might seem an unlikely candidate for prompting one of the biggest ever upsets in British politics — but appearances can be deceiving.

The leftwing MP for Luton North since 1997 and chair of the All-Party Parliamentary Group for Sixth Form Colleges (SFCs), which has backed calls for SFCs to not be subject to VAT, was first to nominate Jeremy Corbyn for Labour leader last June.

“The nominations opened at 12, and I was in there at five past,” he says.

The day that Corbyn was elected party leader was “the best of my political life, because finally the neoliberal, pro-capitalists had been beaten by the party membership,” says Hopkins, who is a former college teacher and long-time governor at Luton SFC.

While he acknowledges that Corbyn has had a difficult time, Hopkins remains a supporter and says: “Jeremy has been doing extremely well, better and better every week.”

Hopkins was born in 1941 in Leicester to Joan, a medical secretary, and Harold, a renowned physicist who invented fibre optics and the first zoom lens.

Following his parents’ divorce when he was seven, Hopkins was brought up by his father and his second wife, Christine, an artist.

They were, Hopkins says, “a left-wing socialist family”, and he remembers asking his father questions about politics at the age of just nine.

But despite his father’s insistence, at the age of 14, that he should study science, Hopkins wasn’t destined to follow in his father’s academic footsteps — not least because he discovered a passion for playing music.

“When I was young, I was a jazz musician, so I spent most of my energy playing jazz, and even when I was a student, at times I was playing five nights a week in gigs,” he says.

His face lights up as he describes the height of his jazz career, when — during his time at the University of Nottingham in the 1960s — he played saxophone as part of the interval band for a performance by the Woody Herman Orchestra.

He recalls that they were a great American jazz orchestra and his band played in the big downstairs bar, while members of Woody Herman’s group sat along another wall drinking as we were playing.

I have always lobbied for FE

“At the end of the evening I walked out of the fire escape with my tenor saxophone and felt like one of them,” he says. “I thought, ‘It doesn’t get better than this’.”

It was around this time that Hopkins married his wife Patricia, in 1965.

The two met when Hopkins was “about 17 or 18, very young” when they were both doing the same Christmas job.

He recalls that she proposed as it was a leap year, but admits “it was a bit of a joke, really — I bought the ring and I said, ‘You pretend.’”

The couple have two children, Daniel and Rachel, aged 46 and 43, and two grandchildren, Sophie and Emma, aged eight and seven, whom Hopkins is clearly besotted with.

“They’re wonderful, bright and funny and always make me laugh,” he says.

Hopkins “did eventually do a degree at Nottingham”, graduating with a 2:1 in politics, economics and maths with statistics in 1969.

A career in trade unions was the natural next step for Hopkins, and he worked in research for the Trades Union Congress (TUC) and Nalgo (which later became Unison) from 1969 until 1997.

His work involved writing “a whole series of publications for them, speeches for the general secretary, motions for conferences, speaking for them”, which he describes as “the political side, not the negotiating side. It was fascinating, and I loved it”.

In the middle of his time at the TUC, Hopkins took a couple of years off from the trade union to teach politics, economics and statistics at St Albans College, from 1971 until 1973.

He says: “I saw this job advertised, applied and got the job. And I thought that I’d always wanted to do a bit of teaching, and it was wonderful.”

He recalls his students fell into two groups — those doing A-levels from middle class backgrounds and those doing day release who were alienated and fed up with being forced to go back to college.

“The cultural difference between the two was so great,” he says. “It just reinforced my socialist view that we’ve got to try and break these divisions down, and FE is the place where you can do that.”

He talks passionately of challenging the perceptions of his day release group, who “all assumed I was Conservative because I wore a suit, had a degree and read the Guardian”, via the medium of newspapers.

It took about six or seven weeks before “one lad in the front row” realised he wasn’t a Conservative, Hopkins says.

Though he only taught at the college for a little over two years, Hopkins’ support for the sector stayed with him.

“Both my children in their time were chair of the student council, which are therefore student governors,” he says. “My wife also was a parent governor at different times.”

Hopkins has used his time in parliament to lobby extensively for SFCs and wider FE.

“The first speech I ever made in here was about SFCs, and the way that they are not taken seriously,” he says.

“They were the geese that laid golden eggs. And of course I lobbied for FE in broad terms, general terms, always.”

It was set up in 2010 “because SFCs need defending, I think — they’ve been marginalised by successive governments, but are brilliant institutions”.

One focus for the group has been the campaign for SFCs to not be subject to VAT.

Hopkins’ political style is, he says, to “tell the truth as I see it” and to apply “constant, constant pressure on particular issues”.

With reforms to SFCs and FE high on the government agenda, there are sure to be plenty of opportunities for Hopkins to apply that “constant, constant pressure” in the coming months.

Lord of the Flies by William Golding – a politically metaphorical novel about the fragility of democracy and the ever-present threat of fascism.

Cruelty — of any kind.

If you could invite yone to a dinner party, living or dead, who would it be?

I made model aircraft as a boy and wanted to design aircraft. I actually spent two years in the aircraft industry in early adulthood and much enjoyed it.

1969: Graduated from University of Nottingham