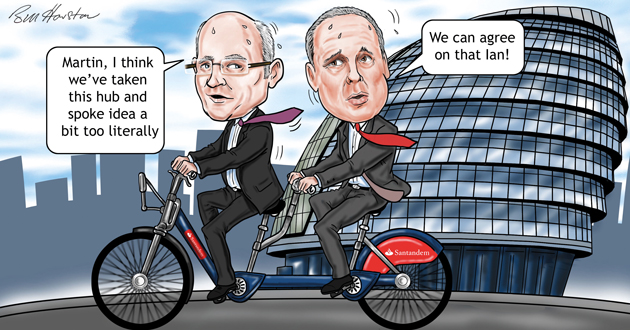 The 157 Group’s proposals for a ‘hub and spoke’ approach to provision at level 3 and above in London have been given qualified support by several non-member colleges in the capital, as well as the Association of Colleges (AoC).

On Twitter, Ian Pretty, chief executive at the 157 Group, described the proposals published on Tuesday as a “huge opportunity to ensure that London is rising to the skills demand”.

It called for single colleges to act as hubs for training at level 3 and above in key industries, including housebuilding, creative industries and financial services.

These hubs, or technical institutes, would form a single point of contact for employers in that particular industry, while other colleges across London would act as the spokes, or satellite centres.

“It is good to see that the 157 Group’s manifesto for the London mayoral elections reflects the priorities identified in the AoC London manifesto,” an AoC spokesperson told FE Week.

However, the spokesperson warned against creating additional institutions where provision already existed.

“It is important for colleges to retain their autonomy so they can continue to provide education and training at all levels for anyone who wishes to study there,” the spokesperson added.

The 157 Group’s proposals, ‘Skills for Work, Skills for London’, call for Boris Johnson’s successor as London mayor to have accountability for training at levels 3 to 5.

“London faces its biggest skills challenge at levels 3 and above,” the report said.

“A 32 borough or subregional solution will not work. It needs a London-wide solution led by the mayor,” it added.

Ian Ashman, the principal of Hackney Community College, said that the proposals were an interesting contribution to the debate over “the issue of specialisation, as well as how we better meet the needs of priority sectors”.

“I believe we colleges need to lead the debate about what should be in the core offer in each locality,” Mr Ashman added.

Peter Mayhew-Smith, principal of Carshalton College and Kingston College, said that “a collaborative approach, drawing colleges together around a specialist hub with strong HE and employer links would be vastly preferable to single institutions working alone”.

Sam Parrett, principal of Bromley College and Greenwich Community College said that, while she was “in favour of a hub and spoke model”, she believed “a more market-driven, less prescriptive approach should be considered, to ensure that colleges can adapt to the needs of their local area, rather than having to focus on only one specialism”.

Ms Parratt also warned that, without improved transport links in outer London boroughs, “our students would be unable to benefit as greatly” from the proposals.

A spokesperson for the 157 Group told FE Week: “A main point we are making is that this type of sector institute should be collaborative across many institutions, a hub and spoke model with many colleges and providers across London specialising in aspects of the overarching sector provision.

“This idea does not limit choice for the learner, it enriches provision. As the document specifies, this model works for colleges as it is agile and cost-effective and it is beneficial for learners as it leverages the full capability London providers have to offer.”