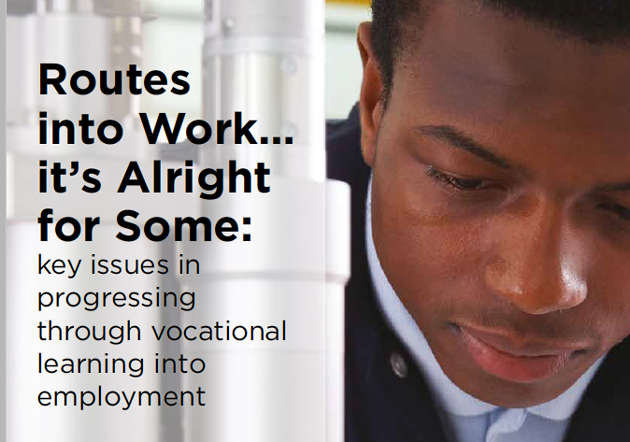 The study, ‘Routes into Work … it’s Alright for Some’, published by The Association of Employment and Learning Providers (AELP), Pearson, with research from the Learning and Work Institute, is intended to explain why youth unemployment has remained stubbornly high as the economy recovers.

A key issue identified was the mismatch between young people’s career ambitions and number of jobs available in particular sectors.

“There is a need for better understanding of whether too many young people apparently prepare themselves for work in popular sectors where the odds against finding work are high because they lack labour market information, or whether they have accurate information but ignore it,” the report said.

“At present, too many young people still find themselves drifting, dropping out and making the wrong learning or job choices.” The report cited research carried out in 2013 by the Education and Employers Taskforce, which found one in five teenagers surveyed wanted to work in culture, media and sport, fields which account for just 2.4 per cent of opportunities.

“This type of mismatch between ambition and likely opportunity does not bode well for smooth school to work transitions,” it said.

The call for research into young people’s knowledge of the labour market was one of 12 recommendations put forward in the report.

Other recommendations included greater promotion of apprenticeships as pathways to work, with the report highlighting the important role work-based learning plays in helping young people not in education, employment, or training find jobs.

The document highlighted research by the National Foundation for Educational Research in 2010, which found the quality of information about post-16 options was a “limiting factor for a significant minority” of those finishing year 11.

Improving the quality of this information was the focus for a number of recommendations in the report, including ensuring school pupils and their parents are aware of all post-16 options, and developing a range of actions to take against schools that don’t provide this information.

The report also recommended that performance of the new Careers and Enterprise Company (CEC) should be monitored “so that successes can be built on and any signs of lack of reach or impact can be detected and addressed,” the report said.

It comes after the CEC announced 33 projects that will receive money from its Careers and Enterprise Fund (CEF), which it says is designed to “increase the number of encounters young people have with employers while in education”.

The pot is worth a total of £9.5m, including £5m from the CEF and match funding.

About 75 per cent of the cash has gone to projects in areas of England identified by the CEC as careers advice ‘cold spots’, which are most in need of careers and enterprise support.

Only one of the beneficiaries is a college – Bridge to Work, run by Loughborough College – while a further six beneficiaries work directly with colleges, a CEC spokesperson said.