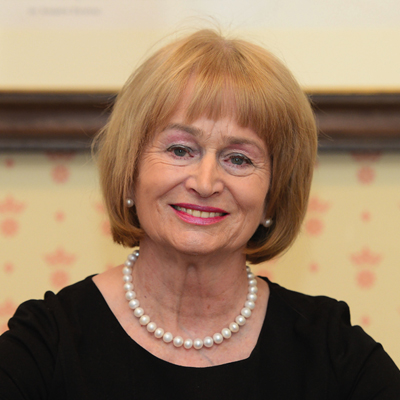 Jean Corston’s journey from council estate to the first female chair of the parliamentary Labour Party and a life peer is living proof that social mobility in the UK is not just a pipe dream.

It left her perfectly suited to leading efforts in the House of Lords to help the next generation of working class kids achieve great things, through better skills training and wider education.

The chair of the House of Lords Social Mobility Committee was born in Hull in May 1942, at the height of the Blitz.

The city’s location on a major estuary meant it suffered badly during the Second World War, with 95 per cent of houses in the area damaged or destroyed.

“It was the most bombed city in Britain — 86 bombing raids on Hull. We were running out of food,” she recalls.

Lady Corston’s father, a glove cutter, was lined up to go into the Royal Navy, until it was recognised that his skills would be better used in the role of foreman at a factory making helmets and gauntlets for RAF pilots.

Her mother worked in shops and looked after Lady Corston and her younger sister at home.

She recalls an epiphany from these early years that set her up as a socialist for life. She was left with her grandparents one Christmas in 1948, while her father rushed her sister to the hospital because she had burned her hand in the fire.

Her grandmother was amazed to find that they would not have to pay for the treatment, because in July the Labour government had introduced the National Health Service.

“I was watching my grandmother’s face, and it was like a cloud parting over the sun,” she says.
“She looked down at me and said, ‘Fancy not having to pay to send for the doctor!’ I knew this was something really important.”

Her family later moved to Yeovil, Somerset, where she attended the local primary school and passed the 11-plus to attend Yeovil Girls High School.

“We came from a council estate — so they didn’t treat me very well at school, and when people go on about how wonderful grammar schools are I want to explode,” she comments.

At 16, she left school — a decision she says was non-negotiable.

“Nobody in my family had stayed at school until 16, they couldn’t afford for me to stay on,” Lady Corston says.

She briefly became a civil servant and moved to London aged 18, before marrying Christopher Corston in 1961.

They went on to live in Nairobi, now in Kenya, where Christopher worked for the British Forces Broadcasting Service.

“I was pregnant and didn’t really want to bring a baby up in a bedsit in London,” she says.

“I thought we were going to Cyprus, but it was changed to Kenya, which at the time was quite alarming because the Mau Mau Rebellion had just ended.”

But she recalls: “The climate was fantastic, I’ve always been very interested in plants and the flowers, the trees, were just indescribable.”

The couple stayed long enough to have two children, though sadly their first baby girl died.

Now a grandmother of six — five boys and one girl — she remembers motherhood fondly: “I stayed at home.

“I used to have to feed a family of four on £6 a week. I made all the curtains and clothes.

“I would collect them from school and they would come home to the smell of millionaire’s shortbread. I never regretted it.”

But after 11 years at home, Lady Corston decided she wanted to stretch herself further. She enrolled in evening classes at Somerset College of Art and Technology, studying A-level English.

She achieved an A grade and in 1972 and became part of the second cohort to start an Open University degree, studying humanities and social science, before launching into politics.

She began as an assistant to the election agent in Taunton in 1974, then became full-time secretary agent for the Taunton Labour Party.

She was appointed assistant to the Labour regional organiser two years later, working from an office in Bristol that covered the seven counties of the southwest.

She and Christopher divorced in 1979 —“very amicably, we’re still in touch”, she says.

Townsend, who passed away nearly seven years ago, encouraged her to apply for her boss’s job at the end of 1980, and she got the role aged just 38.

“I don’t know if anybody at the age of 38 had ever done the job before, but certainly no woman had. It caused a seismic shock – in fact, one of my colleagues sent me a book on behalf of them all saying, ‘To Jean Corston, on her appointment as south-west regional organiser, whether deserved or not’,” she says.

Since then she has been the first woman in a number of roles, including overseeing the 1985 Labour Party conference.

This was a tough task, and not just because of the miner’s strike or the recent Grand Hotel bombing in Brighton that had nearly killed Margaret Thatcher.

Her selection solicited the comment: “You can’t have a woman running the conference, she’ll cry!”

These experiences led her to believe it is important for women to support each other in the workplace.

“Women in politics are often queen bees,” she says —referencing Thatcher as a prime example.

Alongside this work ethic, Lady Corston seems to have never stopped learning, something that shone through in 1986 when she decided to depart from politics to study law at the London School of Economics.

She gained a 2:1 and went on to train at the Inns of Court.

But her career as a barrister was derailed when Labour MP Dawn Primarolo prompted her to put her name on the shortlist for MP for Bristol East, just to make up the numbers.

She assumed she was “not left-wing enough” to be selected, yet by the 1992 election found herself in the House of Commons.

“In my first parliament I didn’t like it at all and I would count the days until a recess. The second parliament I grew to quite like it and the third parliament I loved it. I think I became thoroughly institutionalised,” she says.

Lady Corston worked on select committees, tackled issues such as literacy and unemployment, and became the first female chair of the parliamentary Labour Party.

She says she built “a very good working relationship, with absolute openness” with then-prime minister Tony Blair, despite acknowledging that issues such as the Iraq war meant “it wasn’t an easy time”.

She eventually stood down in 2005, and was told by Mr Blair: “Don’t think you’re going off into the sunset — I want you to go right down the other end.”

And that was exactly what she did, moving to the House of Lords, where she was made a life peer and a baroness.

Here she achieved one of the things she is “most proud of”— securing a ban on routine strip searching in women’s prisons, as part of an investigation into vulnerable women in the criminal justice system that resulted in the ‘Corston Report’.

It is one of her many achievements, alongside her most recent work with the Social Mobility Committee, and even her young grandson understood its significance.

“He once asked me, ‘Can we put that on your headstone?’” she recalls.

I have read a book or story every day of my life since I could read, and picking one is impossible, but if I had to choose one bit of fiction which made me think, it would be The Golden Notebook by Doris Lessing. Essential reading for all!

I love gardening, and know that it is a process, not an event, and that you have to be patient.

Mary Wollstonecraft. She wrote ‘A Vindication of the Rights of Women’ in 1792.

When I was 13, I briefly wanted to be a missionary in India. After that, I just knew that I did not want to work in a factory.

1965: Moved to back to UK to Gloucester, son David born

1966: Moved to Taunton, enrolled at Somerset College of Art and Technology

1976: Became assistant to the Labour regional organiser for the south-west

2001: Made first female chair of the Parliamentary Labour Party

2005: Stood down from House of Commons, joined House of Lords as life peer and created baroness